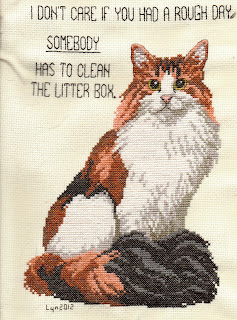 I finished "Rough Day" cat this morning and I really like how it turned out! I realized this morning that this one only took me about a month to do.  I don't know if that should be considered a long time, but I think the amount of time spent on it was reasonable. I posted pictures, once again, of  "Creation" cat and "Control" cat, so you can see all three pictures that I was paid for. I will deliver the cats to Jan on Thursday. She will frame them in the near future. She is very excited. I have been showing her the projects, periodically, so she has been seeing them "come to life", so to speak.

I am showing a bigger picture of "Rough Day" cat than the other two because I have posted the other two completed already. I guess I was just wanting you to see all three together. I am very happy with the way all three turned out.

Now I can get back to the elephant, and start the roses and "Life's Little Tangles" (my HAED). I am very excited about all three of these projects. I am taking time, every day to stitch a little bit, even if it is only an hour. Those hours add up and make progress! Next blog will show progress on one or more of these projects, I am not sure which ones, but I believe the elephant will be one for sure! I don't know how many projects I want going at once, but I also have a project picked out for my great-nephew that was born in January, Khaleb. My niece said she wanted something in the theme of Noah's Ark. I got a Noah's Ark book and have something picked out with a giraffe. If I remember right that was what she really wanted, the Noah giraffe. I will probably try and talk to her again before I start that project, just so I know I have it right.

On Easter I was contacted by Dan, the husband of the woman I was working with. She will be released from the nursing home at the end of this week. They want me to come back. Of course I will.

We need me to work, even if it is just a little bit, to help take care of things like the car breaking down, which it STILL isn't working right and the credit card that went on the high side of the limit because of all the car repairs. When we have a little bit of cash built up we will take he car to the dealer and see if they can figure it out. We cannot really get rid of it, even though part of us wants to, because we have a loan against the car. That is another thing we want to pay off fast and so if I am working, that is more possible.

This parrot bookmark was the one I received from Kelly in our exchange of bookmarks in my yahoo group. I sent her a bookmark that was a hot air balloon ans said "Reading Always Carries Me Away". It wasn't the one I had originally picked out, and I had actually finished everything except the backstitching on the original one, but it disappeared. The day after the election I realized the bookmark was no longer in my stitching bag. Jack and I even contacted the fire station where I was an Election Judge. They looked everywhere as did I, so I suspect someone saw it and snagged it. The original bookmark was pink flowers in a blue and white container.

I asked my doctor if  I could come in this week to do a blood draw so we could make sue my med level is right. I also said, again, how much I wanted to be put back on my original meds. They are telling me that I can have my blood drawn next week and they will talk with me when I see them in May about my being put back on the original medicine. I am so very frustrated with this doctor! I tell you, if it wasn't for my stitching to help keep me calm, I'd be going nuts for sure. The doctor seems to think that the seizures I have had are stress related. Well, they are not helping the stress, by ignoring me!

Maybe I'll have better news next time, on this subject

I need to be signing off for now. Take care everyone!

The past couple of weeks have been up and down for me. 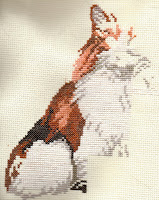 I have stitched a decent amount. I have made a lot of progress on "Rough Day" Cat as you can see. I have been concentrating all my stitching time on "Rough Day" Cat. I will probably be done with this project within a couple of weeks, not sure. What I have left to stitch on this project is the face, tail, left edge  of the cat and the phrase.

I have not stitched on my elephant project at all, so I have no pictures to show you on him.

Since my last post, I was able to purchase the material, DMC threads, and needles to get started on my first HAED. I do so want to start this project, but I really feel like I need to finish "Rough Day" cat since it is the third project of the three that I was hired to stitch. I do not think it would be fair to the people who hired me for me to stitch a different project until what they hired me to do is done, you know what I mean?

I don't have a picture of them, but the tulips that I planted last fall, hoping I was doing them correctly, came up and were beautiful. I planted 50 of the 100 bulbs I purchased last year. I was not sure I was planting them correctly, so I didn't want to plant all 100 in case I was wrong. Also didn't want to possibly lose all those bulbs to my neighborhood squirrels. The tulips looked beautiful for at least two, if not three weeks. This fall I will plant the other 50 so next spring we may have as many as 100 tulips come awake. I have mowed the yard a couple of times already this year. We have used the rototiller in a couple of areas because we want to have a more level yard and we really would like to have a garden of some vegetables this year. Jack would definitely like tomatoes. I don't know what else we are planting for sure, but various things are being discussed.

I got the girls signed up for softball. It was confirmed that Rachel will be put in the draft, even though she doesn't want to be, because a coach who has poor sportsmanship last year is insisting that everyone goes through the draft this year. Rachel's coach last year is going to do everything he can to get Rachel back. It is a quite long story and I honestly cannot remember all the sordid details, but trust me this coach is acting very immature. I just hope that Rachel doesn't end up on the team that she left a couple of years ago. There is a team where the coach was cussing out the kids because he felt they were not giving it their all. You know, honestly, if I had a coach cuss me out when I was 11 years old I don't know if I'd give it my all either.

Jack has been doing alot of bar-be-quing already this year. He has done up ribs, chicken, a pork roast and I cannot remember what else. He has "smoked" a couple different pieces of meat. It has been very good. I am so glad that I bought him this smoker/bbq for Father's Day last summer. He is going to get alot of use out of it, I can tell.

Jack has a pacemaker/ICD unit that was put in in January 2009. I am very glad it was there. Monday of last week at 5:30 in the morning it jolted Jack's heart. By the time the paramedics arrived, Jack was fine, so he stayed home, but he did go to the doctor on Wednesday and had the unit tested and was given the results Friday. His heart rate went up to 262 and then spiked at 400. The gal told Jack those numbers are not compatible with life.

I had a seizure last week. I am becoming quite frightened about these seizures. I am still somewhat confused. Usually after a seizure I am confused until I get some sleep, but I have slept and I am still confused. I am not sure what is going on, why all of the sudden I am having seizures with more frequency. Please pray for me. I have gone, in recent months and years, to having 1 seizure every seven years to having couple of years to now every few months. I had a seizure here at the house Friday night. I was getting the dinner dishes done when I went into it. Rachel and Jack were able to get me in bed before it really hit. That means I have had three separate days since September where I have had seizures.

Well I need to be going. I need to start dinner and get the groceries put away. Until next time everyone! How do tostadas sound for dinner?
Posted by Lyn at 5:00 PM 9 comments: