What A Crazy Month!

I do apologize for being so scarce on the computer in the last month. Things have been on the crazy side. Besides the normal craziness of the holidays, I mean. Honestly, Christmas itself wasn't that bad, craziness wise. We got each of the girls one gift from us, each at about the same price. Sarah got a Visa Debit Card, and Rachel got an MP3 player. I made 25 pounds of fudge and gave probably 23 pounds of it away. Jack did cook a big Christmas dinner because we were thinking that our son from Chicago would be here, but as it turned out he and his friends were unable to make it. That was a real bummer.

I made out like a bandit on Christmas! I got some cross stitch material, a new purse, earrings, two complete outfits, a scarf, glove and hat set, a robe, and sweat top and bottoms, a wallet, and a bracelet. :) I think there is something else that I am forgetting at the moment, but that is what I get for taking so long to post about Christmas! :(

The girls got their semester report cards a couple days after returning from Christmas break. Sarah got 2 A's, 3 B's and 1 C. Rachel got 5 A's and 1 C. Neither report card is anything to be angry at. They both did very well. We are proud of both of them.

Stitching wise, I did completely finish 'The Lord's Prayer' the day after Christmas. A friend 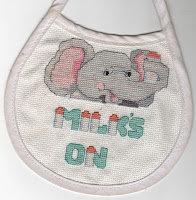 from church took a picture of it for me. Yeah! I then started a bib for my Great-Niece that was born December 5. I was having trouble finishing it because I am out of 301, rust, the color to do the backstitching of the nipples of the bottles, but fortunately my best friend in town had some, so I was able to finish it completely a couple nights ago. I will get it in the mail to my niece in the next day or two.

A few days ago I started 'Footprints'. The pattern says to do it on 32 count material. I had some that I was RAKed awhile back, so I decided to try it. Thanks to Deborah from ILCS, I have the proper size needle, and gold to boot! I like how it is looking so far. I am having trouble with threading those needles though. Is there a trick to them? I can do it, but it takes quite a bit of time, most of the time.

Here are a couple pictures of 'Footprints'. The reason I have been able to get so much stitching done is that Jack had ended up in the hospital again January 3. The incision of his stump became infected and thus he needed intravenous antibiotics.

His regular doctor in Champaign was not getting the infection cleared up. It took another doctor jumping in and doing something before he started improving.

That something seems so simple when you think about it. He saw a puss pocket and popped the pocket and drained the area. You would think that his normal doctor would of thought to do something so simple. I moved him to a local nursing home to finish out his intravenous antibiotics and taking care of the bandaging of his wound. Not to mention the 70 mile round trip with these gas prices as well as getting him some therapy to maybe go up/down the stairs via crutches. The antibiotics finished yesterday, but now we have the therapy to get him strong enough to get up/down our stairs with crutches.

Poor Sarah has been suffering with a migraine headache off/on since Friday. I took her to the doctor today. I am home with her today. I have caught up on my chores around the house a couple of days ago, including laundry. Last night for dinner I made meatloaf, homemade mashed potatoes, and sweetcorn. It felt good to cook for the girls. They appreciated it too. They both said a big, "Thank you". I have been so torn inside by Jack being in the hospital out of town. How does a person take care of everyone at once when they are in different places? Now that Jack is in town, I feel better, much better. There is a big difference between 6 miles round trip and 70 miles, for sure!!!

Take care until next time, everyone!
Posted by Lyn at 5:50 AM