Stitching and Winding Anyone

Whether or not I have completed a lot will probably depend on your point of view. I completely finished “Heaven” last night. I had been struggling with it a bit because the project wasn't centered within the q-snap, thus, I was having issues getting the furthest left stitches complete. I was trying, but wasn't getting very far. What I ended up doing was, I stitched one strand of each color from right to left, so everything on the right side was completely stitched. Then I moved the material from left to right, so I could easily stitch the left side of the pattern. Then I moved the pattern to the right enough that I could easily reach the left side of the material. Picture of where I was when I was done with right side) 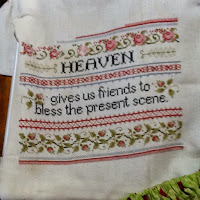 I also started a project, thanks to Mark in ILCS needing a thread for a project he is doing. :) Mark was asking about a particular DMC number, so I went hunting yo see if I could find it and discovered how many skeins of threads I had that needed wrapping! A bunch!!  That's okay, because I have been meaning to do this for a long time. Anyway, what the project was is organizing my cedar chest and threads so I know what I really have. I purchased another couple of thread boxes because I know I have so many extra threads now that I knew I was going to need at least two more thread boxes. I ended up wrapping every single skein into bobbins. Some of these threads were from a company in New York that went bankrupt in 1972! Their factory has been turned into yuppie condos, but still has the company name on the entrance. 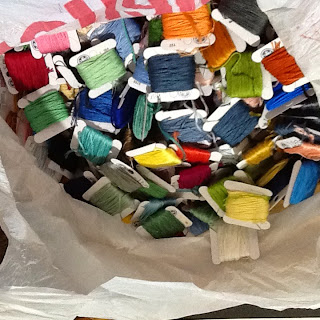 I worked on this exclusively for about five days. Thus far, I have two boxes filled to what I want. I want to leave some “wiggle room” in the event I get more of the color that is in that box. The two boxes I am “done” with are labeled, “Box one of Extras Blanc to 353”, and “Box two of Extras 355 to 598”. I stopped, not because I was done...I am far from done. I stopped because I wanted to work on “Heaven” some more. I really wanted to finish it, which I did! (YEAH!!!)

Now I can get back to “Life's Little Tangles”. If another small project “pops up” it won't be that big of a deal. You know how projects just seems to pop out at you?! I started receiving the “Just Cross Stitch” magazine this year. They have some adorable bird houses and some what looks like some pretty quick spice plant stitches for the kitchen. Then there is Wes and Jess's wedding. Then, of course, there is the project that I will be working on thanks to the retreat I will be going to in early June in Florida!

I am getting so jazzed about the retreat. I paid it off a few months ago and bought my plane tickets as well. In the next few days I will be going shopping for things I need for the retreat. I have been stitching for a very long time and have never done anything like this before. I doubt I'll ever be able to do it again. But I am sure of one thing...I will have loads of FUN!!!!

I have been given some of my Mother's Day presents already. Jack and Rachel bought me two Boston Ferns. They are beautiful! We have them hanging in front of the house right now. When I was out and about today, getting new glasses, Jack called me and asked me to pick up a little cash for him to use on Sunday. The bank was literally right across the street from where the glasses place is located.

Well, that's about it for now. All the Mothers or Mothers to Be have a wonderful day! Happy stitching everyone!!
Posted by Lyn at 5:48 PM