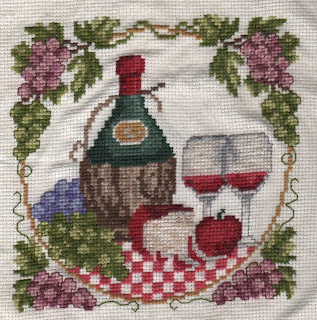 Hello All! Hope this finds everyone well.

I wanted to let everyone know that my Winery Hot Pad for my Son and Daughter-in-Law is done! I finished it a couple of nights ago, but because my 15 year old is such a computer hog, have been unable to post much of anything, much less spend time blogging! I still need to put the material in the hot pad parts, but it doesn't look too terribly hard. I also need to wash it before I put it together.

I have also been stitching on a baby bib for a new baby on the way of a friend. Her son is expecting his first baby in April. The bib will have four baby chicks on it. I have two done so far and was plugging away on number three, when discovered an oops on number three so now I need to frog. Grrrr! I was going to scan the bib this morning to show you, but decided against it because of the oops. Also, I am getting things ready to stitch IS 40:31. Jack has wanted me to stitch this for three years now, and I am finally going to fill that request!!

I have been oohing and aawing over things on patternsonline.com for quite awhile and earlier this week I finally opened an account there and established a wish list and even bought a pattern! The pattern I bought is of a cat plaubf in the toilet paper and it says, "My name is Stop It, whats yours?" We have had cats play in toilet paper so when I saw it I knew it would be perfect for our house.

Our snow is going away right now, it almost felt warm outside when I let the dogs out to do their business. But, with it being the middle of January, I am sure we will have more here. And soon!

Rachel brought her report card home and had straight A's. She was very happy and we are very proud of her. On her first report card this year she had two B's, but got the grades up in those classes. Sarah had one A, four B's and one C. For high school we don't think that is too bad. We are proud of her as well. That is a B average.

As far as my Aunt passing, I e-mailed my cousin a memory of her and it was read at her service. From what I understand, her service was very nice.