WHAT A COUPLE OF WEEKS!!!

Things have been rather crazy around here. A week ago yesterday, I started having alot of pain in my left kidney area, swelled up and went to bed at one o'clock in the afternoon, not getting up until Thursday morning. My husband and I discussed taking me to the Emergency Room on Wednesday, but decided to give me some pain meds first to see if that helped. If it didn't we were going to take me in. I was alright Wednesday night and called the doctor first thing Thursday morning. I was able to get in. He put me on an antibiotic, which I finish tonight. I am feeling much better.

Jack's foot was really bothering him last week. He knew he had to probably be hospitalized for whatever was going on, but he was trying to delay going until after our Anniversary. That didn't quite work out. Late Friday afternnon I took him to the Emergency Room because the pain was becoming unbearable. They made the decision rather quickly to admit him because his foot, about an inch below his pinkie toe, had a huge amount of build up of callus and there was an infection underneath the callus. Jack is diabetic. The hospital started him on an IV antibiotic. The surgeon came in Saturday morning and looked at his foot and said that he would do the debreeding Monday morning. He said, "Why ruin a perfectly good weekend?" What the doctor didn't know is that this was our Anniversary weekend. (We were married on Valentine's Day in 1988). I was there two different times on Saturday as well. Saturday I was there in the morning and left after lunch, took the girls to the YMCA for the afternoon, working out myself while they played racket ball. I came back for a couple of hours after the we returned from the YMCA. I spent all Sunday (February 14) afternoon with Jack. Rachel and I went to church and to the store and then I dropped her home and went to the hospital. [Our hospital has a policy in place right now that no one under 18 can visit anyone due to flu season, so the girls could not see their Dad. Several people I spoke with believe that it is time to drop that policy since it started this past fall with the H1N1 scare. No other medical facility around has that kind of thing in place.] Jack was released on Tuesday morning and is doing fairly well. His foot does look much better.

It may be an interesting few weeks coming up. My daughter, who is 15, has in the past three days decided she will not take her medicine. She is on medication to help her control her anger. When she gets angry, she can be very scary. She usually takes her anger out on her little sister, but has also taken it out on me. Jack and I are not going to allow her to hurt us, her sister or herself. If she goes into a scary rage, we are going to call for help. You may want to pray about this situation.

Rachel's eye appointment to see about the doctor who will put the prism in her glasses and then if that works do surgery, is next Wednesday. We are excited and nervous about this because we want Rachel's double vision to go away!

We will celebrate our Anniversary this weekend. We are both looking forward to it.` 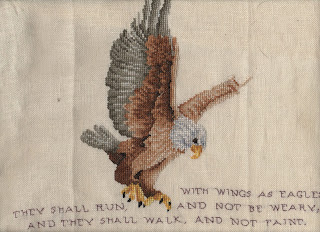 On the stitching front, I was able to work on my Isaiah 40:31 project while Jack was hospitalized. Looking at my last picture scanned February 1 and this picture scanned this morning, I didn't make as much progress as I would have liked, but I think I made progress. I took it with me over to our friend's to watch the Superbowl and
stitched here and there, but I sure wanted more stitching time than I had.

I need to find our camera or buy another because I really do need to start taking actual picture instead of scanning my work. That is especially true for this picture. I could not fit all of the picture on the scanner, no matter how hard I tried! What is missing from what I have done is the line that has where the verse is located. Also the tips of the feathers at the top. GRRRR!! Also I was unable to lay it perfect, to show you that the words really are straight, not crooked.

When we went over to our friend's to watch the Superbowl, Jack had cooked before hand. He made several different Cajun type dishes. They were all delicious. We probably should have rooted for Indianapolis since we live under 80 miles from that city, but we were rooting for New Orleans because they had never been to the Super Bowl. We really enjoyed the game.

The friends that we watched the game with are the same ones I made the baby bib for their granddaughter due in April. Tina, the grandma-to-be, asked me to stitch a burp towel for the baby. She is also a stitcher, but is new at it and where the towel is to be stitched, makes her nervous to try and do herself. She bought it when she and I went to Champaign a couple of weeks ago. I need to look through my small patterns and see which one would be good for a burp towel. I don't think it will take me too long to stitch.

Well, I need to be going. I am going to lunch with a friend from church and need to get ready. Hope everyone is doing great.