My Stitching and Week

Rachel's appointment last week in Champaign went well. She now has an appointment with the doctor who is to put in the prism tomorrow. I don't think the prism will be placed tomorrow, but I do hope it is soon since she has been suffering from major headaches lately and the doctor has concluded that her headaches are caused by her vision problems. I don't really know about that since her headaches just started last week and her vision has been a problem forever. Her prescription is only 7 months old.

Sarah's attitude became bad for a couple of days about a week after she stopped taking her meds. It is back to the way we like now. I will have to tell you the story of how we got her back to the way she needs to be, her chemical balance back to normal, another time. She is here and I don't want her to know what is happening.

Today was a bit scary for me. It started out fine...taking the kids to school and then going to the YMCA and the grocery store...then on the way home from the store, my right front tire blew out. I did have the cell phone, fortunately! I called Jack immediately because:
I called them and told them where I was and what happened. They said they would have help to me shortly to switch out the tire. I called Jack back to tell him what they said. I also prayed. The tow truck arrived about 10 minutes after I prayed. It took him a bit to get the jack under the car because the dirt I was on was soft and the Jack was sinking. The driver finally put a piece of wood underneath the jack and was then able to raise the car so he could take the old tire off and put the spare tire on.

Well, I still haven't actually finished Isaiah 40:31, but I do feel like I am getting close now! I finished the three purple colors in the mountains on the right page and have started on the blue 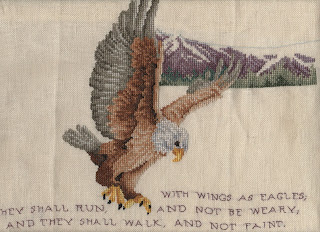 I am getting frustrated with my scanner! I couldn't get the entire project in, once again. The location of the verse is the only thing you cannot see, but it is still maddening! Also, because my scanner is on a shelf above my head it is hard to get it perfectly straight with this material. It lays perfectly straight when I have it out of the q-snap. But getting it to lay straight on a surface above your head, well.....GRRR!

I need to take a break from the Isaiah project to do the burp towel for my friend's grand daughter to be born next month. The baby shower is March 13. I really don't think it will take me more than a day to do the towel, I am just so focused on Isaiah, it is hard to think of doing a different project right now. I will probably take the break to do the burp towel when I have the mountain part on the right page done. Doing the burp towel will give me a quick finish under my belt for 2010. I think the project I am debating myself on what project to do after Isaiah and the burp towel are complete. I have a pattern of a Apricot Poodle that looks so much like our Petro who passed away almost 8 years ago. I also have downloaded a pattern of a yellow car for my grand son. Both are relatively small projects. I believe the next big project I am going to do is of Yosemite's Half Dome. I downloaded it a few weeks ago. It reminds me of home because I grew up just a bit more than an hour's drive from there. I will probably end up having at least one WIP while I am doing Yosemite's Half Dome. I need to figure out what size material would be best to work it on. Be prepared, stitching friends, when I get ready to do it, I will be posting asking for your opinions!

I hope everyone has a great week.