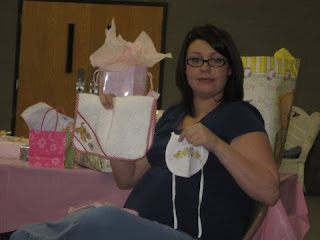 The baby shower was a success. Margo received a lot of things...from diapers to clothing to crib bumper pad. I made both of these items for her. I had wanted to do the bib and had it done in January. I did the burp towel because the grandma-to-be had bought it to do herself and then realized she wouldn't be able to do the project so she asked me. I finished the towel the day before the shower. Margo was ia bit concerned on how to launder them so I told her.

I have decided when I finish my Isaiah project that I will be doing a yellow car. The more I have thought about it, the more I like the idea of putting several cars patterns together and making a quilt for Ethan, my grandson. I tried to upload the picture to show you, but it doesn't want to load onto here for some reason. I am also going to work on a small pattern of a poodle that I 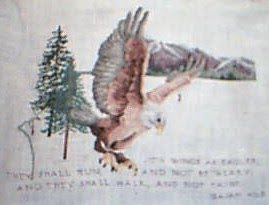 have that reminds me so very much of our dog, Petro. He passed away several years ago from a heart attack. To this day he is sorely missed by all. He passed away June 28, 2003 shortly after turning 10. We now have two dogs, two cats and a rabbit. They are very loved.

I have managed to work on Isaiah some the past week 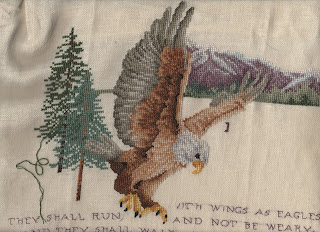 or so. We found our camera, but the pictures of the Isaiah project were too bright. Jack says that because there was too much light. I then went ahead and scanned it. Right after I scanned it, Jack thought to take a picture of Isaiah with the web cam, so that is the picture. You can see I have started working on the trees. The near tree is completely done. I am close to done with the second tree. There are a total of five trees, I think. Then I have the mountains behind the trees and the rest of the verse and of course the back stitching of the eagle. I really want to finish this soon. I am kicking myself for taking this long. Maybe it's bigger than I thought it would be? I know its dimensions are bigger than "Sassy", but "Sassy" took up every square and this one doesn't! I have been working on this for right around two months. The letters are kind of fuzzy on the web cam picture, but at least you can see the whole thing, for once! I went ahead and posted both pics because the picture does look sharper in the scanner photo.

Everyone is doing great here. I have some news, but I cannot share it quite yet. It is exciting for us though.

Have a great stitching week!
Posted by Lyn at 8:33 AM