I Am Nearing the End of Isaiah!

I know that it has been a couple of weeks or more since I posted anything, and I apologize for that. Life has been very crazy here. I still cannot talk about hardly any of it, but trust me, it has made things very much a roller coaster here. No one is pregnant or anything like that, but I have wanted to run screaming a few days. Actually, last night, I did disappear for a couple of hours because of some of it. I took my stitching and drove about 1/2 mile away and sat and stitched in my locked car!

I thought you might want to see my progress, even though it isn't done, done. Thank you, Dawn W., for your help in getting the picture just right to post! I believe that I am REALLY nearing the end of this project. I had made an error in the writing of the 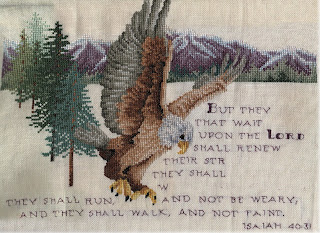 verse. If I hadn't done that I might for real be actually done. Everything that I stitched on Easter afternoon had to be pulled out! I had stitched the line that starts with the 'w' by the eagle's talon to the line that is just below the word 'Lord'. Every word of that area! I think, if I remember right, I even had "upon the" in the frogging. When I got to the line that had Lord, I realized that I had made an oops in the number of squares I had put between the line that says, "and not be weary" and the line that will say, "with wings as eagles". When I started stitching again, after all the frogging, I started with the first word of the verse and decided to work my way down to the lines I know are right. I think I only have one or two strings of thread to finish the verse out. What do you think? When I am done with the verse, all I have left is the back stitching of the eagle and then I am done.

The gal I made the baby bib and burp towel for will probably be giving birth any day now. She was due yesterday. She went to doctor today and is dilated 2cm and is defaced 30 - 40%. Tomorrow is the baby's Nana's birthday. She (the Nana) is excited.

Jack and Rachel went fishing about an hour ago. Rachel has been looking forward to this trip for a long time. She loves to fish with her Daddy. I expect them home late tonight.

We found out Sarah's grades for the third quarter and we are very happy with them. She got 2 A's, 2 B's and 3 C's. She is in ninth grade. Rachel got 3 A's and 2 B's. We are very pleased with her grades as well, but it seems like Rachel doesn't have to work quite as hard for her grades as Sarah does. Rachel is in fifth grade.

I have still been losing weight, though not near as fast as I had been I am okay with that though because the rate of loss was becoming scary. Since mid-January I have lost another 13 pounds. Between mid-May 2009 and January 2010, though, I had lost 100 pounds. I am working out at the YMCA twice a week, if not more. Sometimes I swim, sometimes I go to the part of the Y that has the treadmills, stair streppers, stationary bikes and such. I can now complete a mile in about 22 minutes on the treadmill. Today I did a bit over 2 miles on the steps that move like a stationary bike! I have lost five inches since January off my thighs and gone down another size. On Christmas I had moved into a size 18 skirt and 20 top. I tried on a size 16 in both earlier this week and they both fit great! I am honestly feeling stronger.

Sarah will be starting to volunteer out at the stables at the State Park tomorrow morning. That is not far from here at all. Maybe 8 miles from the house. the Park is on the west edge of town. I am excited for her because she is an animal lover and loves to ride horses. Jack and I think this will be good for her too.

It looks like I'll be all by myself for at least a part of tomorrow because Jack just called and said he and Rachel will be fishing again tomorrow after they take Sarah to the stables. Maybe I'll be able to catch up on my e-mails and complete housework and maybe even stitch on Isaiah a bit! LOL! ;-)

Take care everyone, until next time!
Posted by Lyn at 4:49 PM