THAT DARN FROG BETTER GO AWAY!

I have been dealing with Mr. Frog for a bit over a week! It started with my Isaiah project. What happened is I had gone over one instead of two in some stitches of the feathers, but I had counted the proper width between the section of feathers. When I did the purple part of the mountains, I discovered my error and had to frog about 20 stitches and restitch them so 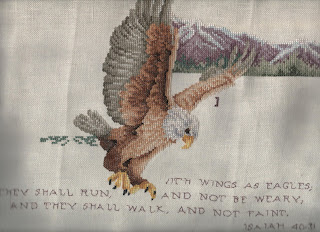 everything aligned properly. Otherwise, I would have had one square of the material showing between the mountains and the cluster of feathers for about five stitches. I also realized that the top line of the verse that I have completed somehow got off a few stitches and so the beginning of the line wasn't as close to the eagle as it should have been. It didn't take that long to fix, so I didn't mention it.

I managed to finish the blue and white parts of the mountains on the right page and put a small start on the first tree of the left page. As far as I know the tree is right. I guess time will tell! 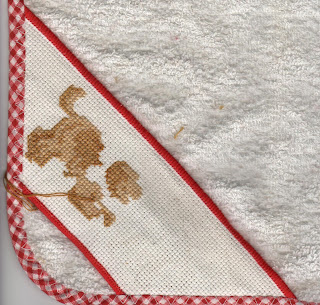 and everything was going smoothly. I had decided to do two dogs, one barking and the other sitting there, looking at the barking dog with a look of, "Okay, whatever." I stitched the lightest color of the barking dog with no issues. Then I started the lightest color of the sitting dog. When I got near the top of the head of this dog, I realized that I had started his head one line too low, so I had to frog all of his head. I redid the head in that color with no issues. I then started the lighter color on the rest of the sitting dog. I was nearing the end of that color on him, getting ready to stitch the back left leg. I realized that because of the angle the material takes, part of his leg and most of that paw could not be stitched. I was mortified! I frogged all of the lightest color of his body. On this dog, that was practically all of him! I can see the holes where the sitting dog was frogged. I am hoping when I hand wash this that it will not be visible.

I decided to keep the barking dog and put something different to which he was paying attention. 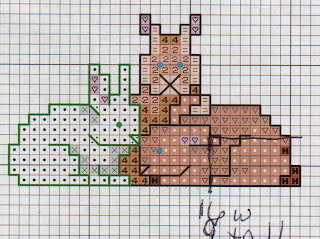 Jack's suggestion was a butterfly. We looked at my patterns and I could not find a small enough butterfly. We then discussed putting a ball. The only ball I could find, close to the size that would work, was a soccer ball. I also found a pattern that had three bunnies. I wondered, "what if I just put one of these little guys?" I discovered that would work.! :-) If you look at the burp cloth cloth, you can see a blue dot. That is where the center of the bunny will be. The bunny I am looking at putting is 16W/9H. He is the one on the right in this group of bunnies. I was wondering, should I try to make a small butterfly too? Would that make the burp towel too busy? Any and all suggestions are welcome!! :)

Mr. Frog had better be GONE!!

Have a Stitchy Wonderful week, everyone!
Posted by Lyn at 6:16 AM