Can you tell I am BEAMING?

Last night was my daughter, Rachel's, fifth grade Honors Assembly. She had originally thought about not going because it was also the last practice of her team before their first softball game tomorrow night. Her teacher encouraged her to come, telling her she was going to be receiving a certificate from a past teacher. She received a great more than that! I created an album on my webshots of everything, including the report card she picked up this morning. You can see that album at: http://family.webshots.com/album/577862704fxywCp. This scholarship award was only one thing she received. She was the only girl to receive it. One other award like this was given, but it was to a boy. When they started describing the girl who was going to receive the award, I was wondering if it was Rachel. The first two things they said was that her favorite subject was science and she wanted to be a lawyer as an adult because she was told she is a good at arguing. The whole place busted up at that line BTW. One other award that she received was given by her music teacher. It also came with a plaque.

Sarah has finished her Freshman year of High School as of yesterday, but we don't know her grades yet. Her report card is mailed after the teachers calculate in the student's finals taken the last two days of school. 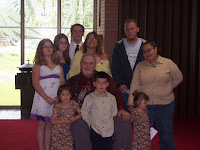 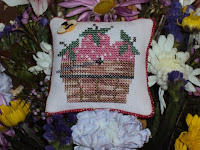 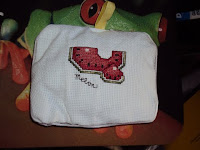 As far as what I am stitching right now, I started on an Apricot Poodle. This pattern was RAKed to me a couple of years ago. it is basically a 5x7 picture, a total of six colors. Thus far, I have 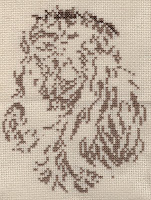 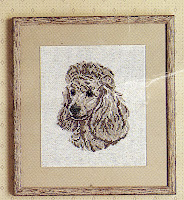 completed one color throughout the entire project. I have done one strand of the second color. I may turn this into a pillow when it is all stitched. I haven't decided. I decided to post the finished pic as well as the progress picture because someone said they had a hard time seeing that it was a poodle. They thought it may be a lion. Same colors, I suppose. Anyway, I am sure it is a good idea to post the 'what it should look like picture' on the first post of the progress. I hope to get more stitching done in the next couple of days. Memorial Day was so relaxing for me. I was literally able to stitch ALL day! Today is Thursday. I haven't stitched since Tuesday morning.

Well, I need to be going. I need to get Sarah to softball practice.

Happy Stitching everyone!
Posted by Lyn at 12:12 PM