This has been a very busy month for me. Between Sarah and Rachel both playing softball this summer, my son and his family moving in in May, Jack's foot, my dryer dying - again, and me spending a week in the hospital because of my knee, it has been hard to tell which side is up. Believe it or not, I have managed to complete three projects!

Rachel's team, Police, has a winning record. They started out with back and forth wins/losses, then had seven wins in a row. They then had a couple of losses, but they won their last game, 10 - 15. I saw the last half of the last inning, Tuesday night. I did want to go to the game, it would have been the first one in awhile because my hospital stay was from June 24 to July 1. I was unable to make more of the game because after I dropped Rachel at the park for her warm up with her team, I had to go to the laundry mat and dry a couple loads of clothes. When I was done with the laundry, I went to the store and got me a soda and some baked lays potato chips. Then I went to the game. When I got there, the other team was up. By the time I got to the bleachers, Rachel's team was up. Rachel was the second batter of that inning and she ended up walking. She then stole second and third and then scored when the batter hit. Her next game is tonight.

Sarah's team, SWAT - Softball With Attitude, has wins and losses, but I think their record is more a losing record at this point. I know Sarah's team has lost the last few. She had a double header when I was in the hospital. The first game, they lost 4 -3 and the second game her team lost 11 - 2. She doesn't play again until Monday, July 12. She will have a double header that night and then another double header the next night. Sarah is also keeping herself busy with volunteering at the stables.

My son, and his family are still living in our home. Things are rather crowded and sometimes we all get a bit cranky, but we are surviving. I know John and Denise are looking for an apartment, but they haven't found one. They need a three bedroom because the Illinois law says that you can have no more than two people per bedroom in your home. We are way out of compliance with that law right now, with them here. We have a two bedroom home. With John, Denise and the kids here, there are nine people. We are hoping they find a place soon. John has found work, but I think he's going to need a different job to be able to afford living elsewhere, personally.

Jack's foot ulcer is now the size of a dime. It is on the bottom of his foot, about an inch below his pinky toe. Around Mother's Day, it was close to healed, more the size of a pencil lead. I think it has worsened because he has been on his feet a great deal more than he should be in the past few weeks. I am worried about his possibly losing his foot. I know, I am told I am a worry wart, but lets face it, this foot ulcer thing has been going on since Presidential Election Day 2008. He does use a wheelchair outside the house, has an electric chair for inside that he uses, but he there are times that neither can help him and he has to put weight on the foot. Jack is diabetic, so he takes alot longer to heal.

I ended up in the hospital on June 24 because of my knee. On June 23, I noticed my left kneecap was sensitive to the touch. When I went to bed that night, I noticed it was swollen, like I may have twisted it, it was also a little pink. Jack and I talked about did I fall, or what in the world did I do to make my knee swell. We could think of nothing. When I awoke, the knee was still swollen, and the pink had darkened and spread. We decided to take me to the doctor, but Jack had his weekly wound clinic appointment, so we did that appointment then took me to the walk-in clinic attached to my doctor's office. The doctor there spoke with my doctor and they sent me to the Emergency Room, telling me that I probably had cellulitus, and I needed to be admitted for IV antibiotics. When I got there, the ER doctor wanted to give me a round of Antibiotics there in the ER and then send me home. He said I had cellulitus. I said, "Time out, my doctor said I should be admitted!". He called my doctor and promptly admitted me. The pink of my knee had turned a deep red by this time and had gone from being a small spot, about the size of a quarter, to engulfing my entire knee and about half of the outside of my calf and a little of my thigh as well. By 8:00 that night I was in my room I'd live in for the next week. LOL

I had thought to bring my stitching bag with me to the doctor's appointments, so I did have

something to do. I stitched the yellow car, completely, the first car of the car quilt I am doing for my grandson. The piece of material this car is on is long and skinny. What I was thinking was putting a few different color cars, of this same pattern car, on this piece and then putting different style of cars on other pieces to make up the quilt squares. I need to figure out what colors to make my middle

piece cars. I found out that there is a store here in town that will give me lessons on how to make a quilt, so as soon as I have these pieces stitched, I will go to them for help in putting it together, since I have never done that before. I took my poodle with me as well. Naturally, I did run out of the color I needed while I was in the hospital, to finish the poodle. Jack brought it to me when it arrived in the mail. We had ordered the color, and a couple of other colors, when I realized I wouldn't have enough to finish him completely. I managed to get all but about 5o stitches done before I was released from the hospital. I did finish it out the first night I was home. I need to wash him, good. It looks like there is a spot the material near his right ear. Not sure 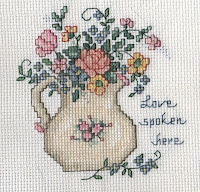 what is is. Hopefully dawn dish soap will get it out. Jack brought me a project to work on while I was in the hospital I did have uncut material in my bag, so that was fine and very much welcomed. He picked out a pattern called 'Love Spoken Here'. After I did it, which I did complete during my hospital stay, I asked him what he wanted me to do with it. he said we will be framing it and giving it to our Pastor's wife. She and I have become very good friends. The light purple french knots, I was originally thinking as putting as beads, but I didn't have the right color bead, so I did the french knots. French knots are not the easiest stitch for me to do. I hope it looks alright with them. I started my second project ever on evenweave since my return from the hospital. The first one was Isaiah. Anyway, this one is, 'The Lord's Prayer'. I haven't scanned the project yet. The pattern is in a book that I truly love. I have done some bookmarks out of it. It also has the 'Footprints' pattern that I want to stitch. I am on the hunt for an elephant pattern. My Aunt, who had MS for 40 years, died while I was in the hospital myself. My Uncle told me that she collected elephants, so if I wanted to stitch him something, an elephant would be the thing to stitch. I actually offered to stitch something for him and asked what he wanted and that was what he told me.

During this hospital stay, we finally got some answers about my stomach issues. I may or may not have IBS, as the doctor I had last summer diagnosed, but we discovered I do have stomach ulcers. I recently changed doctors because I had become just plain unhappy with my doctor. The second night in the hospital, my stomach started its pain. I mentioned it to the nurse. She called the doctor, who ordered a CAT scan that night. The next morning I had a scope down my throat.It showed that I had two ulcers in my stomach. One is 4mm and the other is 7mm. They are close together, but not touching. Also the part that goes from my esophagus to my stomach and then my stomach to my intestine is weak. I need to have another scope in 6 weeks from the hospital stay scope to see what is happening with the ulcers. The doctor asked me if I was vomiting blood. I told her, "no", but I guess I need to watch for that to happen. The doctor is having me take prilosec now, so we'll see if that helps.

I need to sign off for now and put my foot up for a bit. My knee/leg is starting to swell. Happy stitching everyone!
Posted by Lyn at 8:22 AM