Sorry I have been gone so long, but it wasn't by my choice! My computer just flat shut itself down, with the message that it was overheating. We didn't know what was wrong, but we knew we couldn't afford a new computer and we were hesitant to pay a store for repairing the computer, so it just sat for a long while. Jack and I discussed that I really did need my computer for a number of reasons, so I went down and bought the compressed air stuff at Wal-Mart and we cleaned the computer that way. It worked and so I have my computer back! :)

During my absence from the computer, my son did marry his long-time girlfriend. We have 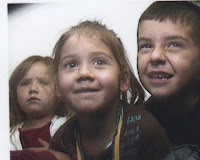 considered Denise our Daughter-in-Law for a number of years. They have been a couple for eight years. They have three children, This picture was taken yesterday of the kids at the mall. From left to right is Adriana (2 yrs), Maria (4 yrs), and Ethan (6 yrs). We did videotape the wedding at the courthouse, but don't have the proper cord to download a videotape to the computer, or I'd show that to you. What was funny about the wedding was the judge. John and Denise wanted the kids present for the wedding. Denise looked beautiful in her gown. When the judge, whom Jack and I know, found out the children were John and Denise's, she said, "it was 8 years in the coming! You should have donee this years ago!" We all laughed. Jack and I have been trying get them to marry for several years. They almost got married 2 summers ago, when we were planning a trip to California at the time. We canceled the trip because our water heater died because of a flood in the basement due to heavy rain. We had to either fix that or go on the trip. John said he was wanting to get married with us there.

My daughter Rachel started cheer-leading just before the new school year with a local youth football league. She became involved with it through her best friend, Kelsie, who has been a 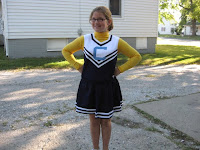 cheerleader for a few years now. Rachel started going to practice with Kelsie in early August and learned all the cheers. The coach called us and asked if Rachel could become a cheerleader as well. We said it was alright with us if she really wanted . Kelsie's younger brother plays football in the league, in the group just below what Rachel and Kelsie cheer. Rachel and Kelsie are cheerleaders for the Junior Varsity team. The team has played three games so far. They lost the first two, badly, but they won yesterday, 12-0. The team is the Danville Chargers. My BFF in town took this picture of Rachel at her home after the game yesterday, when she and Jack arrived after the game. There was a bar-be-que at our friend's home yesterday in honor of the Labor Day Holiday. Jack, Rachel, Kelsie arrived late, but not too horribly late. Harold, the host, had started the coals heating up probably 20 minutes before they got there. Jack and the football coach ended up working out a deal...Jack has everything to do a PA system, except the speakers. The coach made a call. Jack now has speakers. In return, he will call all the games and provide a tape for the National Anthem. Jack is jazzed about this. Rachel is doing well at her new school. She moved up to Middle School this year from Elementary school.

I have been stitching during the month I have been gone. I don't know if you could say that it has been alot, but I feel 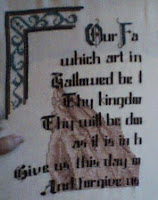 good about the project and its progress. I started stitching on "The Lord's Prayer" right after my hospital stay during the last week of June. The project's pattern spans 4 pages. I have seen fellow stitchers call each page of projects this large a finish. I did finish page 1 in late August. Jack took the picture of it with the webcam that is attached to his laptop. The picture of page 1 and two's progress was taken last night at my BF's house at the BBQ last night 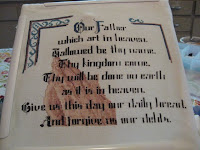 . I did work a bit more on the right corner after this picture, so now the design is around the corner, almost done. I am excited about my progress on this project.

My weight loss has continued. The rate of loss has slowed a lot, but now it is at a healthier pace. Before we discovered my ulcers in late June, we had no idea why I was losing the weight at the rate I was. Anyway, when I had a scope done in late July, the doctor said the ulcers were healed. Since then, I have lost, but at a rate the doctor prefers. Even though my ulcers are gone, I am eating healthier foods and smaller amounts now. I am rather excited about my loss now. I haven't been this small since I was a teenager. At last weigh in, my loss was 155 pounds. I picked up the clothes I took to a gal who does alterations a couple of days ago. I took her some of my newer skirts, the ones I'd bought in January, and a couple of others. She ended up taking at least two of them up six inches. One of them, she completely removed a panel. A friend from church took me out to lunch this week and we went clothes shopping afterward. She bought me a pair of jeans. I haven't worn this size since I was 16 years old!

My husband's foot ulcer is improving, gratefully. I am praying that it will be gone by Christmas, maybe even before. He is diabetic and has had this thing basically since the day Obama was elected.

My town's City Council runs with Alderman. The districts are called Wards. The Alderman in my Ward is retiring at the end of his term, in November 2011 due to health reasons. I am looking into running for the Alderman's spot. I have always wanted to do something productive for my city, but never new exactly what to do. I thought of this, and picked up the packet to see about running. So far I am the only one to pick up the packet. I need to get a maximum of 50 signatures to be on the spring ballot to possibly be the Alderman. The signatures need to be filed by mid November 2010. I am going to start walking the Ward and going to the neighborhood meeting to gather the signatures.

Sarah is still working at the stables, though since school started we only allow her to do this on the weekends. She is doing well her sophomore year of school thus far. She has her first boyfriend now. They both volunteer at the stables. He is a senior in high school at a neighboring town. He has signed up to go into the military after he graduates next spring. He is a very nice young man. She will be 16 in mid-October.

My Dad told me my nephew who has been in the Marine Corps for a couple of years now has made it to a 3 striped Sargent. His unit will be going to Afghanistan in late September or early October. We are so proud of him. We are also praying that God will keep him safe while he is in the military. War time is always hard on everyone.

Well, that is basically everything to catch everyone up. I promise to keep everyone better updated, now that my computer is working again! :)

Happy Stitching, Everyone!
Posted by Lyn at 1:24 PM