So Many Things Happening!

I have been hoping to post the latest picture that was taken of 'The Lord's Prayer' with this blog, but the gal that took the picture for me hasn't had a chance to e-mail it to me yet, I will write another blog

and post it then. This picture of 'The Lord's prayer' was taken when I was in Tennessee with my friend as moral support. I finished page 2 on September 23. I then started on page 3. I was able to do a great deal of stitching during the time we were in Tennessee and almost finished the x's of hand and the words to the line that went through the hand. Since coming home from Tennessee, I have finished the x's of the hand and the words that are on page three as well. I am now stitching the lower left corner. Then I will do the backstitching and be done with it, moving on to page 4, the final page! I want to show you the progress so badly! 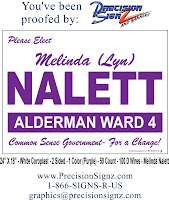 Besides stitching, I have been looking into becoming an Alderman for the City of Danville. I need a minimum of 25 signatures and a maximum of 50 to be on the ballot. The signatures are to be turned in November 15. The election is April 5. I have have 30 signatures so far. Jack designed the signs that we will ask my supporters to put in their yards. I will order them in a month or so. I also have my 10 principle of good government on a flyer that I am passing out. So far I am being received very well. I am a bit nervous because the other person who picked up a petition has a very well known name in town. The person who is currently the Alderman is stepping down due tto health issues.

My step-son and Jack ended up having a major blow up in mid-September. The tension had been building for awhile and that day the volcano erupted, so to speak. John packed up his belongings and moved his family back to California. This time he moved to Modesto though, so at least he is no where near the person causing his family problems there. We didn't hear from them at all until last week. We were glad to hear that they are fine.

I picked up all the clothes that I gave the woman to alter for me since my weight loss has begun. It is amazing the amount of clothes I have now! I sent my Mom the picture of me in the blue top that I recently put on my blog, taken just a few weeks ago, and now she wants all kinds of pictures of me. She cannot believe what I look like now.

I am looking for a job too and think that I have a good shot at one that isn't that far from my home. I sure am keeping my fingers crossed anyway!

Sarah and her boyfriend, Wes, go to Wes' Homecoming Dance in a couple of weeks. Sarah is excited. Wes is a Senior this year. Jack and I are very proud of him. He signed the papers last week to join the Army after he graduates from high school. I believe he told me his report date is mid-June 2011.

Rachel's cheer leading squad has competition coming up. She is nervous.

Both girls will get their report cards in a couple of weeks as well. I think both are doing well in school, I guess the report cards will tell for sure!

Well I better go for now. Happy stitching, everyone!
Posted by Lyn at 5:20 PM