I finally have the pictures that I promised. Sarah looked absolutely beautiful for Wes's Senior Prom. I tried several times to crop the picture so you see more of them and less of the cars and back yard, but I couldn't get it to save. GRRRR! Anyway, I think you can see that they look great together and that Sarah is absolutely beautiful. She looks much older than 16 to me.

Wes graduated from high school a couple weeks after the prom. Here is the pictures os him and then him

and Sarah at his graduation. Jack and I are very proud of Wes. He will be reporting to Army Boot Camp at Fort Sill (I think is the name) in Oklahoma (I know) in just a couple of weeks. 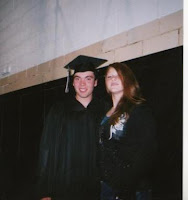 Here is a picture of my Precious Moments project I am working on for my Great Niece. The plan

is to give it to her Mother (Danielle) for her daughter's first birthday in early December. I have done a little work on it since I scanned this a couple of days ago, but only on the white part of the pillow.

My Pastor surprised me last week. He is a cross stitcher too and we often 'talk shop'. The other day he gave me a new DMC cross stitching Bag. The one that has compartments in it and an ability to hold several threads on the stitch bow system. (I think its called). I had noticed his bag and we started talking. A few days later he had to go to Hobby Lobby and he ended up buying me one. I use bobbing instead of stitching bows, but I think I can make it work for carrying my supplies. Who knows, I may decide to try the bow system and see if I like it better than the bobbin system! The bag does seem to carry everything I feel I need very well. It looks like everything will stay clean and so forth, since it zips shut.

Yesterday I went to Rachels school for an Honors Assembly. She was on the Honor Roll (again) this quarter. Her report card will be 5 "A"'s and 1 "C". The "C" is in Math. This report card is basically the same one she recieved the other three quarters of school. Sarah had said Rachel was on the Honor Roll because it was Middle School. My response to that is if that was true, why didn't she get on the Honor Roll 4 quarters in a row at that school? Next school year Rachel will be in seventh and Sarah in eleventh. I don't know exactly what Sarah's grades will be. The last day of school is Wednesday and Sarah has finals in her classes on Monday and Tuesday.

Well, I need to be getting some housework done, so I must sign off. Everyone take care in this heat and have a great weekend.