I have had an interesting summer so far. Both girls have started their softball seasons, Rachel just turned 12 a few of days ago, Sarah is volunteering at Thunderwolf (the stables in the area), Jack getting use to his leg, and then of course me getting back into the routine of the YMCA and then there is my taking care of the house and not to mention my stitching!

Rachel's softball team has had four games thus far. They won the first three, big. All three ended on the mercy rule. The fourth game, Friday night, Rachel was actually calle4d up to the league above her age group because they needed another player and Rachel has greatly improved from last year. Her coach (on her league) has told her she earned the first base position. She is doing very well with it. I am so glad that we were able to get her the glasses she needed w/ the prism because now her double vision is under control. In game one she knocked in three RBI's, game 2 she knocked in two and game three she knocked in two. Last night she walked once and stuck out once. The team she was on last night lost 13-3. Her team (B league) lost 11-8. Part of me wonders if Rachel hadn't been called up if B league would have won? She has her fifth game tonight. Not sure who she is playing.

Sarah's team has had three games so far. They have lost all three. Sarah is the catcher and has been playing that position for several years. Sarah has had several hits and a couple of RBI's as well. The problem, I believe with Sarah's team, is that they didn't get very many practices in before the season started. I think there were a grand total of three before the first game. She has a double header tonight against John Deere.

We had been telling Rachel for the past year that she could have her first cell phone when she turned 12, and that was what we bought her for her birthday. It is a good thing, we believe, because if she is away from the house and needs us, we can be right there. We bought her a Dairy Queen Birthday cake. It was finished in short order. She had the last piece The day after her birthday.

So far this summer Sarah has spent the majority of every day at Thunderwolf. She loves horses and started volunteering out there in Spring of 2010. She is very good with the horses and has her favorite horse that she likes to spoil. His name is Gypsy. She has talked with her boss and will be riding this horse in the Labor Day Parade this year. The funny thing to me about the name of Sarah's favorite horse is when I had a horse before we moved from Fresno years ago, her name was Gypsy.

I am excited because my girlfriend since childhood is going to fly out this fall. I have not seen her for a couple of years and I miss her so very much! Also, I am looking into the possibility of flying home in late September and going to my class reunion. It is hard to believe that it has been 30 years since I graduated. If I do this, I may see if my girlfriend and I can maybe fly back the same flight. That would be so neat to me!

Jack is still adjusting to his prosthetic. All things considered, I think he is doing very well. He is getting around fairly well. He has therapy several times a week. He is just doing Physical Therapy right now, but will be starting therapy in the pool soon. And he has also startede swimming at the YMCA occasionally. 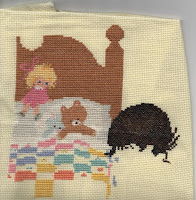 I like how it is looking. All of the squares between the colored squares call for white. I want to finish all the colored squares before I do the white ones. I had started to do the girls skin, but then Sarah told me that she thought it was too shiny. I wasn't sure about it so frogged that. Had only put in eight or ten stitches of skin, so wasn't too bad. Thought before I did the skin, I'd put up a poll and see what you all thought. Jack and Rachel like choice #2 the best. The girl is to look part Caucasian, part African American. The picture of the baby here is my Great Niece. The poll is at the top of my blog. Would appreciate it if you would give me your opinion. The choices 1 through 6 are stitched on the piece of material to the left in this paragraph. Choice one is the top, choice 6 is the bottom. My stitching on choice 5 was a bit wide, but I think you can get the idea.

Meanwhile, I did start stitching a pattern I am doing for Mrs. Gardner. She is the mom of my long time girlfriend. Micki and I

have been friends since we were

eight years old. She has been through everything in my life with me. I'd have to say she is my best friend. I have another great friend that I have made since moving to Danville thirteen years ago, and she is my best local friend (Tina). I taught her how to stitch. But, Micki and I have been friends for over forty years. The picture on the right is the one I scanned when I originally started this blog post. I had to stop though because I needed help figuring out how to post the poll for the colors I should use in my Precious Moments picture. For a number of reasons, I was unable to get back to it right away. The picture on the left is my progress as of this morning. I think I may have to frog at least a few stitches in the flowers between the verses, but am not sure about that yet, so am leaving that part alone for now. I placed an order with 1-2-3 Stitch for DMC 3326 and Kreinik Fine (#8) Braid #002 Gold. I was flat out of 3326 and have never used Kreinik. I have heard a great deal about it, so we'll see how it goes. Jacked checked for me this morning and the order was confirmed. If this order is like the other things I have bought at 1-2-3, it should be here in the next couple of days.

That is basically it for now. Have a great day, everyone!
Posted by Lyn at 1:56 PM