I finally finished the bookmark for Wes completely. I mailed it off to him, along with a very long letter, telling him about last week's softball games and the other news of the family. How I finished it was by putting a bookmark on the back side to hide the understitching of "ARMY". I stitched on the 'under' bookmark, "Property of Carl Winans". Carl is his first name. He goes by Wes with his family and friends but in the Army he must go by his first name. I 'glued' the two bookmarks together with stitching witchery tape and then trimmed both the top and bottom of the bookmark to hide whatever fraying had occurred and prevent more from happening. I like how it turned out. I haven't heard from him yet, so I do not know how he likes it.

I did finish frogging the verse on 'Amazing Grace' and have started stitching that verse again. I 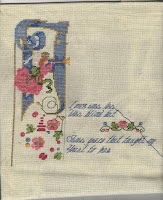 also have quite a bit more of the left side done. I haven't stitched as much this week as I'd like to, but things have been on the busy side here. I may put aside 'Amazing Grace' for a couple of weeks and stitch on the Precious Moments pattern again. I am wondering (once again) if 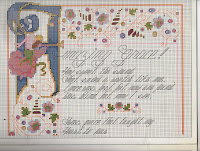 there is a problem with 'Amazing Grace'. The writing of the verse seems off. I am starting to think it may not be the verse, but the flowers between the verse are over 2 to the left too much. I think I need to sit and figure that out for sure. I do know that I am going to go ahead and stitch the flowers, etc., at the top (they look like the flowers to they left) and then the gold down the outside of the right side (just like the gold down the outside of left) to help me make sure I have the thing centered right. It also has a blue line (like the one on the inside of the left) going from the horn across the top. The flowers atop will go between the gold line and the blue line. I think if I do this part, and leave the verse alone for a bit I can see better what, if anything, is wrong with the verse itself. Or if it the flowers between the verses. The picture on the left is the pattern page, and the picture on the right is my piece so far. Do you see anything off. Like I said, it seems like something is off two to the left in the verse, but I know I started the lines of the verse in the correct spot on the left. Does this mean the flowers between the verses is what is off?


I do need to work on the 'Precious Moments' piece more. Wouldn't it be neat if I could have both pieces done to give when I go to California while I am in California? My niece is in Fresno too! I haven't worked on my 'Precious Moments' piece for quite awhile now. I am feeling a bit guilty about that. Maybe if I cannot finish both pieces before I go to California, I can finish them while I am there!

Rachel's team did end up winning first place in the tournament. They were second seed when the tournament started because they had had a loss (only their third) right before the regular season ended. They were undefeated in the tournament itself. They ended up beating the first seed team twice rather handily. They won the first game 22-6 and the second game 12-7. It was a double elimination tournament, which means to be out must lose twice.

Jack and the girls will be renting a car on August 8 and going to Dallas for 10 days to visit Jack's sister. Originally it was going to be just Rachel and Jack, but it turns out Sarah will be able to go. I can't though because I need to stay here and supervise some things we are getting done to the house. The company that will be fixing the leaky basement will be here on August 11. The job will take two or three days. We are also finally getting central air in. We have needed it for quite awhile, especially because of some of Jack's health issues. They will be here during that same week. I love my sister-in-law, and would love to see her too, but I do understand why I cannot go. We also have several pets to consider. We have two dogs, two cats and a rabbit. Besides, I get to go away to California in about two months. I'll be buying my tickets next week.

Take care everyone. Have a great week!
Posted by Lyn at 7:18 AM