The second "Cat" project out of three was completed a couple weeks ago. Jan, the woman I am stitching them for, took a picture the next day but she was unable to e-mail me the picture until yesterday. (She has been having computer issues and actually had to go buy a new computer). I like how it turned out. I started stitching on the third "cat project" -- "Rough Day" probably the day after I was done with "Creation" cat. I have not gotten very far on him at all. (Rough Day is the picture on the right). I believe that is because I was stitching on other projects as well. I got involved in an exchange in one of my stitching groups and felt like I needed to stitch that project. I am stitching a bookmark for Kelly. I am not complaining at all! I like stitching things like bookmarks, I just hope Kelly likes the bookmark. I am nearing the 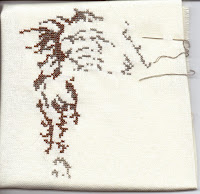 "backstitching stage" on the bookmark. But before I got involved wit

h the exchange, I did decide to restart the elephant project for my Uncle as a memorial of my Aunt. The picture on the left is the last picture I had of this project. I think I stitched a little more on it before I finally decided I really didn't like the way it was turning out. I had purchased the kind of material I really wanted for this project and just decided I was going to re-start the elephant. My progress on the restart is on the right. I have not noticed any uneven squares or anything else that makes me unhappy that I am using this material! I think that this pattern, even though it is a fairly large project, will not take that long (if you calculated stitching hours per project). I have not scanned a picture of the bookmark for Kelly yet, but I think I will wait until I am done to scan it since from what I understand, I'm not really suppose to post any progress pictures on exchanges so the person receiving what you are making doesn't see.

Well, I did get a small job that ended up lasting a week. I may get called back to it, but for now it is on hold. I started working for an older couple (private pay) helping her get in/out of bed, on/off toilet, her bath, dressed, and to the table for breakfast then to her chair in the living room. It was 2 hours in morning and then 2 hours at night, every day. Yesterday the weather was beautiful here in Danville. She wanted to go for a ride. Her husband wanted to take her. She ended up falling on her way back into the house after the car ride. He called me to help get her up, but because of the way she had landed I was unable to get her up. She was not being cooperative. Paramedics came and took her to the hospital because she was complaining of her arm hurting. Nothing was broken, so they sent her home. I went to her home when she got there last night after her release from the hospital and she was still having issues about walking as well as she usually did. Not that she could walk perfect before, she uses a walker, but she could walk quite a way without any new issues. Well when she got back from the hospital, on the way back into the house she fell again, twice. This time I was able to get her up. Jack was in our car [yes, its fixed...hold on for that story]. I asked him to call Sarah to help me get her to her bed since she was having so many issues. Sarah and I were able to get her into her pajamas and into bed. He then told me I could go home for the night and he'd see me in the morning. When I came in this morning, I was able to get her to the bathroom, but she said she was in a lot of pain and was not really wanting to try and do much of anything. She said her back hurt too much. I told her I understood that she was hurting because of her falls yesterday but that she needed to at least try to work with us. She refused. After my shift this morning her husband ended up calling her doctor and explained what is going on. He put her into the hospital. From there she will go into a nursing home. I feel badly for her, because if anybody understands how much a person hurts the day after a bad fall it is me. He did tell me that he will call me again, when she needs elp again. This tells me they do not blame me for any of this.

The majority of last week the car would not start in my driveway. It was having the same issues it had been showing for weeks now. We finally had it towed to the second mechanic again on Friday. When he got it, he said the battery was completely dead and that was the issue. We had a very hard time believing that the battery was the issue because of the symptoms the car had been doing with us. Evidently when they got the car there was no lights coming on, no dinging sounds, nothing at all. They said they had charged up the battery and it had started right up. Jack told them to let it sit over night and see if it would start the next day. It did not. Then they went and put a battery in it they knew was good and left it alone until the next day and it started right up. That was when we went ahead and brought it home -- yesterday. So as Jack said this afternoon, God granted me this small job long enough to have the funds to pay for the car repair and make a payment on another bill. God is good!

I was also able to recently finally get a new printer! I ended up printing out the big HAED pattern that I recently purchased as well as another pattern I have been wanting to print out for a long time but have not been able to since our printer had taken a nose dive. Now I need to buy the material to stitch this pattern on. Hopefully very soon!

I know you all are interested in how my doctor appointment went with the doctor about the seizures I had recently. She increased my medication a little at a time to a total of 300mg more than I was taking. Next month I am suppose to have a blood draw to show her where my levels are now. They were on the low side of 'okay' range when she had them drawn before, back in October. I see her again in May. So everything is being taken care of.

I need to be signing off for now. Jack and I have a store run that we need to do. Take care everyone, and happy stitching to those of you who stitch!
Posted by Lyn at 10:27 AM