Because of My Car I could Stitch!

I figured out that I have done at least 1900 stitches on ”Creation” cat since my last update. I know that each "graph like square" is 100 stitches being that it is 10x10 and I have completed 17 of those as well as at least 200 stitches in the stitching that is not every square in the 10x10 stitched. Thus far on page 2 of ”Creation” cat I have just worked on the cat's body. He is made up of three colors so far, DMC 975, DMC 976 and DMC 3827, on page 2. I know when I get to his paw area on this page he will have a couple of other colors, but, so far, page 2 has just been those three colors. I had to have Jan take me over to the local LNS and get a couple more skeins of both 975 and 976. I was almost out of the darker of the two and I knew I was going to need more of at least it and suspected I'd need more of the lighter color. Jan bought me two of each color just to make sure I have enough, especially since I still need to stitch the third project for her and we do not know exactly what colors it calls for. Next week Jan and I will go to Champaign and get the material I need for the third project.

Because Jan wanted “Creation” Cat done on the dark brown material, I felt like I needed to have the writing of the project in a lighter color. The pattern called for it to be done in the darkest color of the leaves. (That was DMC 3345 – Dark Hunter Green). Honestly, to me, that just didn’t look right, with the project on dark brown. So I asked Jan what she wanted me to do. She looked at it and said to use the color that was just a shade lighter from the color in the leaves. Honestly, that still didn’t look quite right. I asked Jack what he thought and he said to have it in a lighter color green, almost what he called a sea green. He asked me to bring him my green colors so he could see what color would be best. After looking over all the greens, which meant me pulling out all my thread boxes, he picked out DMC 955. I did show Jan after only putting in a few letters, just to make sure she liked how it looked and she loved it! She agreed that the greens either the color of the leaves or close to the color of the leaves just didn’t look right. She also agreed that DMC 955 looks excellent!

The car issues are still happening! We are so baffled! I went out to the car Sunday (2/19) morning to go to church and the car would not start. A friend came and picked us up for church and then took me by CVS so I could get my medicine and took me home. Later in the afternoon Jack really needed a store run done to get a couple of things related to dinner. I decided to try the car, since the grocery store is a three or four mile walk, one way. It started! Monday morning it would not start again. I had it towed to Mark’s. They looked at it and tried to diagnose it since it wasn’t working all day Monday and Tuesday,. The shop and Jack discussed something about putting in a starter button to bi-pass the electronic ignition but then it started by itself on Wednesday and so I walked about halfway to the shop and then a friendly family took pity on me and gave me a ride the rest of the way. It is soooo maddening!! Jack had me go down to the store that makes keys and make another key to the car in the event that we do end up doing something else to the car. The car is working fine for now. 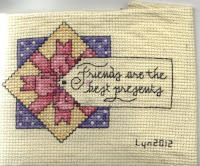 church and before that grocery trip. (2/19) I think I’d have to say that was a ‘quick stitch’. I know that I worked on it only, when I started thinking about it, but it only stitched on it three days. I kitted it together Friday (Feb. 17) when we were talking about having the car towed to Mark's Electric and having me stay with the car and have the guy tell me what he did to the car to get it going. I wanted to take something to stitch, but I didn't want to take my cat or even the elephant, which I know I need to pull out and stitch on again. I got it all together and ready to go when the tow truck got here and then the car started even though for me it didn't an hour earlier. Can you see the steam coming out my ears?! I ended up driving the car to Mark's but because it would start, they could not help me. Is anyone besides me getting mad at this yet? Anyway, when I came home from Mark's with the car Friday, I sat in my room and stitched the day away. My stress level went to zero. I did stitch on Saturday too, but I did other things as well; Friday it was a stitch and only stitch day. So, the stitching that you saw in picture 1 of this project (last post) was done on mostly Friday and a little on Saturday and then picture 2 progress was done on Sunday.

The tulips I planted in September before going to California when my friend Michele was here, have started making an appearance. I am so happy! I honestly was unsure if I was planting them right, since my dad is the “plant person” and I know very little. But I did good this time. I was also concerned on whether or not the squirrels would dig them up. I am unsure when the mums are suppose to be making a comeback, but I did what I was told to them this winter, in early December, cutting them severely back. We will see if they come back to life this spring. I'm keeping my fingers crossed that they come back.

My Nordic Needle order arrived on 2/21. I was right. The order had counting pins, beading needles and one package of black beads and one package of white beads as well as something called a Star De-Tailor. What it is supposed to do is help you get your short threads tucked away properly on the back of the material. I haven’t tried it yet, but I am sure there will be a time that I can.

am using the counting pins on “Creation” cat now. I think if I ever order counting pins again I’ll buy the longest length I can get. These seem awfully short to me. They work, but they are short. I ordered the black beads because I want to put them on both of the cat projects where French Knots are called for. They look so much better than my French Knots.

Jack made me happy! I have been worried about him because he hasn’t done much of anything except read fan fiction on his computer for the past several years really. I know that his health is not the best and I know he lost his leg to diabetes in Nov 2010 and I have been praying that he start doing something. Well today he told me that he wants to start going to the Y! If he follows through on that he may start to lose some of his weight. He was talking to me about how he needs to get his blood sugars under better control and move around more and even exercise. So maybe my prayer is answered?

I have still waiting to hear from Pam Kifer so I can get her address since she is the winner of drawing 1, the hoops of various sizes and lap stand.

I Instant Messaged Wes the other day and we talked for probably at least 20 minutes. I told him that Sarah got his package and told him how Rachel was in the paper (you can see that on my facebook). We had a good talk. I think he knows how much we all love and miss him.

Well, I neeed to be going. I am not sure if I am in charge of dinner or if Jack is, but either way, it is time to start cooking!

Take care everyone and know that I appreciate each and every one of you. Thank you for taking the time to stop by.