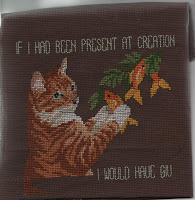 I feel like I have made a lot of progress on “Creation” Cat. I have taken time to stitch during the past week and I am feeling pretty good. I do not feel stressed at all right now. I am done with page 1, except for the E-N on the word GIVEN. The pattern is a full 2 pages. Page 2 is the lower half of the cat. He is standing on his hind legs. At his feet is a "mouse flower". I am hoping to give you an updated picture by next week. Maybe I'll even be done? I don't know that for sure. That is a hope, I guess. 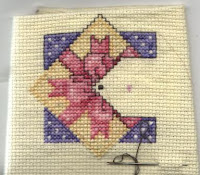 Yesterday I woke up before my alarm went off, by at least an hour and I wanted to stitch, but I honestly didn't want to stitch on "Creation Cat" because I wanted to scan him before I stitched on it again. I have a book of smaller cross stitches and I started flipping through them and found a really nice one that I thought my friend who is getting the Irises might like. I found some material that would work for it and discovered that I had all the necessary threads, so I just started stitching away. I did go swimming at the Y yesterday, but didn't really do any chores or get on the computer. I just basically stitched the day away. But you know, that's okay because sometimes we just need to do a time out and not worry about anything at all. I basically stitched 90% of the day and got almost everything done here done. The only thing that I have done on it today was color DMC 333 and DMC white as well as all the backstitching that is done I did today. If everything goes according to what I am thinking, I will have it done some time tomorrow. All I have left to do is finish the backstitching on the bow as well as around the yellow and purple and then backstitching in the phrase. What the phase says is: Friends are the best Presents. It really isn't a huge pattern (57W x 41H) but I just thought Mary-Beth would really enjoy it.

I have always considered her a good friend, even though we have only met in person once and that was just a few years ago. She came to my area with her employment and while she was in the area, she came over and had dinner. We have been friends since we became pen pals way back in fifth grade through Girl Scouts. At the time I lived in California and she lived in Massachusetts. It would have been hard to put many more miles between two girls becoming pen pals through Girl Scouts! We use to write each other once or twice a month. It slowed as we became adults, but we do still keep in contact.

I am so jazzed! I have been looking around for a red rose pattern. My daughter-in-law really likes red roses and I wanted to do a pattern especially for her. I recently was looking at Dickey's completed projects (Dickey from ILCS). I saw this project of a bouquet of red roses in a gold vase and fell in love with it. I e-mailed him and talked with him about this pattern. I told him that I saw this pattern in his completed projects and was wanting to see about where could I get the pattern. We agreed that I would send him a gift certificate to 1-2-3 Stitch and he would send me the pattern. The package form Dickey arrived earlier this week. I am so excited! I know I need to 'kit it up' and get the material too but I really want to have this completed for her as a birthday present. Her birthday is August 31, so I feel like I have plenty of time.

We had car issues again. I went out to the car Saturday morning to get some groceries and the silly thing would not start again. GRRRR! Jack worked on the car all day Saturday (2/11) and got no where but mad. Sarah drove me to the grocery store with her pick up. We got a ride to church on Sunday. On Monday we ended up having the car towed (again). This time we had it towed to Mark’s Auto Electric. They had the car most of the day and figured out that it was some sort of fuse that needed replacing and the area around that fuse needed cleaning. The fee was very minimal. I ended up spending more money between the two times towing the van to get it fixed than the cost of replacing the fuse! (LOL) Thus far it seems to be working fine. I don't want to jinx myself though.

Ordered and received a huggie from Forever Cowgirl. I had originally wanted this huggie before Christmas because I wanted to give it to my sister on a q-snap as a Christmas present, but now I guess I’ll give it to her as a birthday gift. I may do it as a “Just Because” gift, since her birthday isn’t until June. The huggie is made out of a material that has the Marine Corps Symbol on it. My sister’s oldest son was discharged from the Marine Corps in October 2011, after completing a four year stint. He has recently enrolled in college. I am not sure what he is studying, but he is talking about once he is done with college, going back in the Marine Corps but that time going in as an officer. I am very proud of him.

I recently placed an order with Nordic Needle. I am excited about it as well. I am also getting frustrated about it though because it has been over a week now since I placed the order. I called them on Wednesday and was told that the order was shipped out on Tuesday. I have not received it yet and it is Saturday. North Dakota isn't that far from Illinois and previous orders have never taken this long.

In my order I got two different colors of beads. I have a real problem getting my French knots to look right, so I thought I'd try it with the beads. I have done it that way before and liked it. But the last beads I bought were too big to use for French knots. I also got beading needles. I just hope that threading the needle isn't too hard. I also bought some counting pins. I have heard a great deal of good about this tool and thought I'd give them a try. I thought they might come in handy, especially once I do start the HAED. I still need to get my printer working and buy the material for the HAED, but hopefully I will be able to do that soon. I know that there is at least one other thing that I ordered, but I cannot remember what that is right now.

As far as my drawings...

Well, that is about it for now. Please take care, everyone. Happy stitching and if everything goes right I'll have at least one finish to report by next week.