The Craziness of July!

I have been wanting to update everyone for the longest time. July has been an absolutely crazy month for me. I was getting hours at work, a great thing, but I was also going to both Sarah and Rachel's softball games, taking care of the house, and stitching! 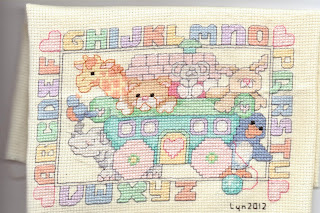 Ruby, the woman I take care of, is doing well. The way my schedule works with her is: four days on, four days off. The days that I work, I work two hours in the morning and two hours in the evening. She has some days that she is very strong and others that she needs her wheelchair. She gets so frustrated with herself, when she talks because she is hard to understand . The stroke she had effects her speech. Some words are very clear, others are very hard to understand. She likes to watch my cross stitch pictures come together. I have been working on "Zoo Babies" at work, when Ruby was just watching television or sleeping. I have got everything done except the few beads put on. The pattern actually calls for French knot eyes in these places, but I have always had a hard time with those blasted things! The bird, above the Rhino needs one and the grey creature close to the top of the boat need two. My beading needles had somehow gotten out of my stitching bag, but I found them. Under my bed. Now I just need to take the few minutes to put them on and then I can send the finished project to Danielle! 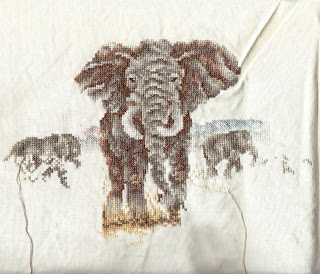 Since finishing Zoo Babies, except for those few beads, I pulled out the elephants for my Uncle again. I have stitched some om this project too, but I think my 'thrill' for this project is gone. Not because I don't think Uncle Curt will like it, I know he will love it, but because I have personally had so many issues with it. Remember, I originally started stitching this project on a different piece of material and got the largest elephant almost all the way done before deciding to restart the project on a different piece of material. The holes were not even in the first piece, for some reason, so the stitches did not look even. I have stitched what I had done on the first go around and then some, as you can see. Christina, a stitching friend in Florida, told me that she would go ahead and stitch on it a bit for me. She suggested that I treat it like a round robin, and I am going to take her up on the suggestion. Thank you! I guess I may have lost my mojo for this one. I was stitching it when I was hired to do the cats and then I ended up getting started on "Life's Little Tangles". In the next couple of days I will send this down to Christina, with the threads I have and the pattern book. The few stitches you see on the far right are some stitches in yet another elephant in the picture. On the left side, besides the elephant I am working on, there is a tree and yet a fifth elephant. There is also the ground cover and the bushes in the background. Part of me is wondering if I ended up cutting my material shorter, width wise, than I should have. However, If I have done this, I am thinking of  omitting the elephant on the right that I barely started and the one on the left not even started yet. We will have to see how it pans out, I guess. 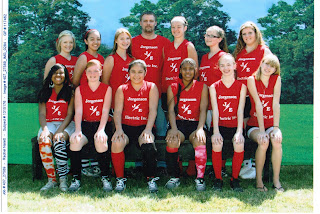 Both Sarah and Rachel have finished their softball seasons. Rachel's team ended up being the Champions of "A" League. The tournament was a couple weeks ago. It was a double elimination  tournament, and her team was defeating everyone. Then, when it came down to the Championship game, her team would of had to lose twice to end up in second place. Her team was home team. I was originally suppose to work the day of the Championship game, but swapped days with the other worker so I could go see the game. Game one started at six o'clock and ended up going into extra innings. It ended at almost nine o'clock with a score of 23 - 21. It was a very tight, very good game. Except they lost. Game two started after about a twenty minute rest. It went the normal number of innings and Rachel's team won 6 - 13. They were playing like Champions for sure! A couple of the girls on the team were not able to participate in the tournament because of going out of state at that time, but they still did very well without those girls. I know at least one of those girls was usually a big hitter and good fielder for the team, so coach was a bit nervous, but it turned out great anyway. Rachel is in the back row, second from the far right.

I went to the doctor in early/mid July and he filled out the form for me to get my driver's license back, since I have been seizure free. I believe a huge reason I am seizure free now is because of my insisting on my meds being changed back to what they were before I bore children. I took myself off of the meds, having the doctor put me on something else, because I was told that particular medicine was bad for the growing baby. I am not going to give birth to anymore children, so as far as I was concerned, it was okay for me to go back to the first medicine. In this medicine I average about one seizure every seven years. In the past years, Jack and I were realizing, that I averaged at least one seizure a year. Recent months had been even more frequent, with one in December 2010, one in September 2011, two in January 2012 and one in March 2012. I started my old medicine in April and have been fine ever since. 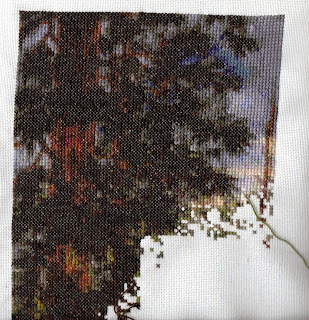 I have also been working on my HAED, "Life's Little Tangles". I am nearing the end of page one. Can you see that this is a pine tree? I was planning on working on this project for a few days, hopefully finishing up page one and maybe even starting page two. Page two has a great deal of sky. I am not sure what else, but I will discover, I am sure! This picture shows the length and width of page 1. Page  1 is eighty stitches wide and 100 stitches tall. What I have been doing is,  as I finish a 10 x 10 square of the pattern, I highlight that square on my hard copy. I scanned this picture last night and then did stitch a little bit more before going to bed. Where I stitched was in the middle bottom part of the picture, so now that area at the very bottom of the picture in the middle is just about solid. When I finish getting it solid, I will go over to the right side of the pattern and work that until it is solid. Then, I will stitch the last 1,200 squares of the lower right corner. 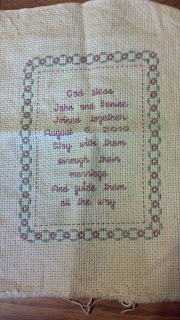 A couple years ago I stitched a small, simple, wedding announcement for my step-son and his wife. We had a sort of 'falling out' about a month after they married, and they ended up moving back to California. I ended up never framing the piece and giving it to them. Their second Anniversary is coming up next week and I am thinking of framing it and sending it to them. Why we had the falling out is not really that important anymore, but the lesson really does need to be learned. Unfortunately, my step-son is acting extreemly inmature and telling our grand children lies. I am hoping that if I give them some of my stitching they will consider it a peace offering.

My daughter-in-law has told us that she wishes they had never returned to California. What the whole thing, honestly, was over was that John needed to rely on himself to take care of his family instead of moving himself, his wife, and their three kids into our home and expect that Jack and I take care of them as if they were all our minor kids. John had a job but would not contribute to the house. With them here, we had nine people in our home. We live in a two bedroom one bath house.

I know Denise loves roses too, and so I am going to do a pattern of red roses in a gold/black bowl. Not sure when I will have it done, but I am wanting it to be my next start. Maybe I'll have it done for her by Christmas or her birthday of next year. Her birthday is in late August, and with today being August 1, there is no way to have it done by then!

I cannot remember if this happened before I posted last time, it has been so long since I posted, but I wanted to let you know that my daughter, Sarah, is being promoted at her job. She is now the Assistant Manager. Not bad! She will turn 18 in October and starts her senior year of High School in late August. She started working there the week before she turned 17. I am very proud of her. She is thinking of trying to graduate in December, a lot of kids do, and find a second job, maybe as a waitress somewhere?

Well, I need to sign off for now. I have house chores to tend to as well as stitching to do! Have a great week, everyone!
Posted by Lyn at 10:01 AM