Page Two is Getting There! 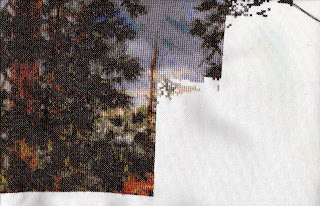 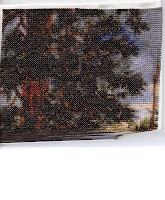 A couple of weeks ago I finished page one of "Life's Little Tangles". I really wanted to update at that time, but then some things happened around that time and I was unable to update. I was able to keep stitching though, so decided I'd move on to page two and show you an update when I had  half a chance. It is here! The craziness of the days, will slow down, hopefully. At least during the time the girls are in school. Sarah starts her senior year today and Rachel started  eighth grade. The picture in upper left corner is page one completion. The next picture is what I have stitched on page two so far. I really like how the project is looking so far. What is 100% done on page two is over to 110 and down to 40. I'm sure you can see that I have stitched a bit to the right of 110, but am not done on the top 10 section. The furthest I am right now is 140. The bottom part I have stitched goes just beyond 50.

I have been working steady at my care giver job. My client has been home from the nursing home since early July, but honestly, I am worried about her. She seems like she is getting weaker. She can usually walk a distance with her walker without any problem at all, but the last two days I worked have been all wheelchair, and just a few steps walker.

I am still cleaning homes as well, but am thinking of trying to get more clients in that aspect, since we really need me to work and if I lose my caregiver position again because of her going in the nursing home, we will be  stuck! Please pray for this situation.

My daughter, Sarah, is starting her senior year of high school today. She has turned into such a wonderful young lady. Earlier this week she and I ended up going out to pick her up something and it turned into a nice long talk. We went to dinner and really enjoyed ourselves. Honestly, before this talk, I was worried about her, but not as much now. She does seem to have her head square on her shoulders. She has been working at her job since October of last year and is now an Assistant Manager! :) Her pick-up is giving her problems, again, but we hope to have it fixed soon. Keeping our fingers crossed.

My daughter, Rachel, pulled her hamstring while doing cheerleading at a football game a little over a week ago. She started trying to walk on it, like the doctor said last Friday. She is still in alot of pain, but I told her she needed to walk because the hamstring would tighten way too much and never   heal right if she didn't. So she is. She went to school today with her brace on, even though it didn't help her outfit look 'cool'. We wanted her to have the brace at school because we didn't want her to force the walking and figured she could do that here at home.

I started working out at the YMCA again last week. It felt good to get back on the elliptical. In 35 minutes, including the 5 minute cool down, I ended up going 2.42 miles. I don't think that was too bad. It was over 3,000 strides.

There was a sudden death in a family that we consider dear friendsin early August. The girl who died was only 14 and died choking while having a seizure. This brought my seizures to the top of Sarah's list. She is very worried about me since I had been having seizures. I changed medicines in April, going back to what I was on before I had children, and I have been seizure free since then. In the six or seven months before making the change I had had a total of 4 seizures which is unusual for me. But I have not had one since changing medicine.

My church now has a new Pastor. He is very nice. We really like him and his family. They came here from Florida. I am not sure if  his kids (teenagers) have ever been in cold winters but I do know he has. He was telling me yesterday his first church was in Ohio. I have agreed with his sermons thus far.

Today is Jack's birthday. He is doing pretty well. He wants to basically kick back and enjoy the day, so that's what we will do.

Everyone take care and sorry it has been so long between updates. I'll try hard to get an update to you sooner.
Posted by Lyn at 11:12 AM