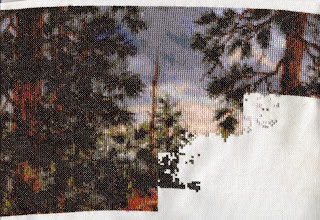 Sorry for so long between posts, I really meant to do this a long time ago, but September was a very trying month for me.

I was battling some issues, but believe I now have that under control. I have been stitching as much as I can. I am more than 50% done with page two. Jack was planning on me entering this into the fair next year, but not sure I'll have completed by then. It is a twenty-four page project. Granted, not all the pages have the same amount of stitches to be done, but still, it is a rather daunting thought to have it completed in eight more months. I started on this in either late June or early July and have only got this far.

I am also still taking care of the in home care lady four days a week and cleaning a few houses as well. Trying to get more business there. I did pick up one more client definitely, but have been doing alot of walking door to door introducing myself with a flier about what I can/will do.

I have also been taking care of my family, getting Rachel to/from practice and games, she is a cheer leader for the Danville Chargers. A youth football team. Her competition is coming up in the next couple of weeks.

Jack somehow got a burn on his stomach. He cannot feel the right half of his stomach because of nerve damage that happened when he had his kidney removed in December 2006 because of cancer. We think it happened as he was carrying a bowl he took out of the microwave from the microwave to wherever he was going in the house, but we are unsure. Remember, he is an amputee, so is in a wheelchair, so he cannot carry thing the traditional way. We took him to the doctor about it last week and it is looking much better now.

I hope everyone is doing great! Take care, until next time!
Posted by Lyn at 4:18 PM