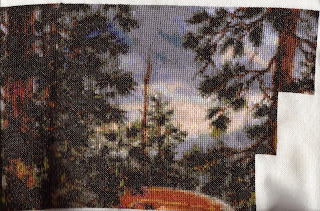 Once again, even though I have not been updating my blog (shame on me!) I have been stitching! The picture in the upper left I scanned in the middle of October. Cannot remember the exact date. The other picture of  "Life's Little Tangles" was scanned ea 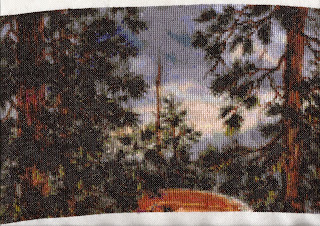 rly yesterday evening. Then I began working on page three. The first column on page three is only three wide, as opposed to the usual ten. I am going to stitch that column completely from bottom to top and then work my way down from top to bottom on page three as I did on pages one and two. I am nearly done with that three wide column. I have figured out that when I do have that column done, I will have nearly three hundred stitches done on page three. I post a picture with page three on it next time. 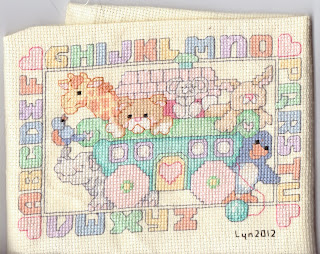 I  also went ahead and finished the beading and French knots on "Zoo Babies". You may remember I started this one earlier this year to give to my niece for my Great Nephew, Caleb. I felt badly because the picture I did for his sister's room, a "Precious Moments" pattern, was quite a bit bigger, but my niece assures me that it is great and she loves it. Danielle had requested that I stitch a project with a giraffe in it for Caleb's room. I went through the books I had meant for young children and this was what I found. 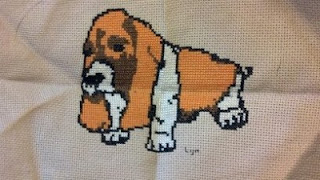 I actually completed "Henry Basset" a few years ago. I did it because I love Basset Hounds. When I was growing up we had Basset Hounds and I loved them very much. Anabelle was the Basset we had when I was real young. She was a tri-color. When I was 6, she had a litter. We were allowed to sit quietly and watch the puppies being born. She had a total of 13. One did die, though all the others were fine. We kept one. A male that we named Dirkson. He was all yellow except for a small spot on his hip by his tail that was white. It was the shape of the Sun, so his AKC registered name was Sunshine. He crossed Rainbow Bridge when I was 13. A disc slipped in his back so my parents chose to put him down as opposed to having surgery because they were told it could very well happen again. Shortly after his death, my parents got another Basset hound. We named him Waldo. He was a tri-color of black, brown and white. He was the nephew of Dirkson. He passed away when he was eight. I do not remember why right now. That was the last dog my parents had. I think why I remember Dirkson's death so much better than Waldo's is that Dirkson died while I was visiting my Grandparents out of town and no one told me until I got home. When Waldo died, I was away at college, but my Mom called me to tell me. I have another Basset Hound pattern of a tri-color basset, the same colors as Anabelle and Waldo, and I think I will do it for my house, though not sure when. 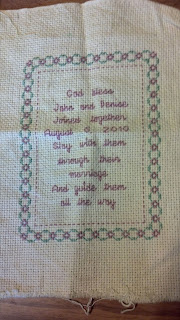 I need to iron and frame "Henry Basset". I have decided I am going to give it to our vet this year as a Christmas present. It has been sitting in my "Done Stitching" pile and I keep talking about giving it to the vet. This year I am just going to! I have never given them a gift at Christmas, but I think a cross stitch of an animal might be a cute gift to them.

The next project pictured is also one I did a couple of years ago. I did it as what was meant to be a wedding gift for my step-son and daughter-in-law. They got married while they were here in Illinois. I honestly just got myself so busy I never ended up framing and mailing to them. My plan is to get it to them as a Christmas gift.

I made a pattern for Denise, my Daughter-in-Law, which she loved. It was of a bottle of wine, glass, and snacks on a table. I still plan on making her a pattern Dick from ILCS gave me of roses in a gold and black bowl. My problem, I guess, is that I don't know if I should put down "Life's Little Tangles" and stitch on some of these other projects, or should I just stitch "Life's Little Tangles" until it is done? Now that I think about it, I am going to have to put "Life's Little Tangles" down occasionally. I signed up for an ornament exchange in ILCS that is suppose to happen soon. I have not seen the list of whom I am assigned to swap ornaments with, but I think the list should be coming out soon. "Life's Little Tangles" is obviously going to take me several months to complete. Part of me is afraid if I put it down for too long, I wont get back to it, the other part of me keeps thinking about other projects I want to do. I have a baby bib that I want to stitch. Wes's sister is due to have her first baby in May, if I  remember right. I think I will work on that during the slow times when I am an Election Judge next Tuesday. Hopefully, we will be pretty steady, considering how important this election is, but we usually have lull periods, where we can do what we like as long as we do not leave our assigned precinct. I do not want to take "Life's Little Tangles" to the

precinct. I'd rather have a smaller project with me. So maybe I'll take the baby bib and whatever ornament I am going to stitch. I have only done one ornament and that was in an exchange on this same group a couple of years ago. The recipient loved it. That made me feel good.


I have been working hard at trying to get more clients as a housekeeper. I told you that I have started trying to bring in extra money to help make ends meet. This is a copy of the flyer I keep on the computer. I go ahead and print up several and then cut the sheet in half so each sheet gives me two fliers. I then go around various neighborhoods and introduce myself. Most people have been very receptive. I do have a few more clients this month than I did before I started doing this. I am hoping to get even more though, because I did lose my in-home care client for awhile. She was becoming very weak, and so ended up going to the nursing home for a maximum of 100 days.

My daughter, Sarah, had her 18th birthday this month. It is so hard for her dad and I to believe that our oldest daughter is eighteen years old! She is a senior in high school. She will have enough credits to graduate at the end of the second quarter. She is wanting to take classes at the junior college after graduation, but because the semester will end in January this year instead of December, because school did not start until late August as opposed to mid-August, she won't be able to start classes at the college until the fall semester. The reason school started so late was because of construction on a school that neither of my girls attend, but is still in the district, so school was delayed for everyone! :( She still has the job at Subway and is hoping to either increase those hours or get a second job or maybe quit Subway after finding a full-time position somewhere. We are very proud of her. She is proving to be a very responsible young lady. She was our answer to prayer. We have had issues occasionally with her, but lets face it, who doesn't occasionally have issues with their parents?

Our younger daughter, Rachel had her fall concert at school last week. She has played the euphonium now for three years. We are hoping she continues it when she moves into high school next year and become a member of the marching band. We know that marching band members can get scholarships to college. Rachel has been on the high honor or honor roll every quarter she has been in school since kindergarten. It is really hard to believe that she will be a Freshman next year!

Jack's health has been good and he has been a wonderful support to me during my recent rough patch. The medicine the doctor put me  on seems to be helping a great deal. I am so lucky he is MY husband. He is definitely my better half! :)

I believe I have started losing weight again, which is not necessarily a bad thing. I had lost over 150 pounds and have basically stayed at that weight for almost two years. But, recently it seems like I am losing again. I still have about 50 pounds to lose before I would really be where the doctor wants me, according to his chart. The only place I really am carrying any weight now is my thighs, which is where I was the biggest when my weight was so high. The doctor also told me that he doubts that I really have 50 pounds  of fat because of my lose skin from my previous large weight loss. I do know I have stayed the same size for the last two years. If he is right and some of my weight is loose skin, I am either going to have to live with it or somehow work it off. I know there is the surgery to remove loose skin, but that isn't really an option for me because of the cost.

I am so glad that I watched the World Series this year and that the San Fransisco Giants were in it and won! I grew up a San Fransisco Giants fan and went to their games at Candlestick Park as a child. I remember my sister getting Willie Mays' autograph. I haven't watched much baseball as an adult, but I think I want to start watching again. I live a couple hours south of Chicago, so could see the Cubs. St. Louis is about 5 hours away, so could also see the Cardinals.

Well, I am going to sign off for now. I want to check my e-mails and I have some house chores to do, not to mention stitching I want to do!
Posted by Lyn at 2:15 PM