I am finally getting around to updating you on my stitching and other things going on. Once again I have fallen behind on this job! I do so intend to update every week, but a lot of things have been happening and I just didn't get to my blog. Honestly, this month, I have not spent much time on the computer at all. 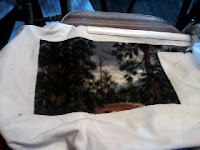 I was working on "Life's Little Tangles" and everything had been going great on it. Then, on Election Day somehow a hole got into the material. I was  absolutely devastated when it happened and have been raking my brain with ways to fix the hole instead of having to scrap what I have stitched thus far. First I took it and a piece of the same kind of material and count to a friend who sews alterations to see if she could put a piece in the hole. She did, and it looked fine, but when I got to the area of the piece of material it started fraying badly. I went ahead and pulled out her patch and frogged some of what I had stitched and have made a patch that I am temporarily attaching with cross stitch needles and as I get to the area will remove the needles one by one. One needle atop, one on bottom and one on each side for a total of four needles. This was the progress before the hole happened. The hole is actually in the area of page four, but I am debating doing much more on page three unless I can make certain my patch job will work. I am doing this over two and I know the fabric I originally purchased had a four inch margin on all sides and that the width with page three done is almost 200 with the total width being 450, so if I had to I'm guessing I could scrap what I did and do the picture over one instead. The problem is I remember trying to start this over one and I was uncertain how it looked. Maybe that was just because I am new at HAED projects? I don't know. We'll have to see how this goes. I want to do this pattern so badly!!

Between when I was waiting for "Life's Little Tangles" back from Deena and stitching a bit on it, I started a baby bib for Wes's sister, Katie. I am working on the fifth animal right now. It is an elephant done in DMC 818. If I remember right, there are a total  of seven animals. Most of them are wearing diapers. I thought it was cute. I hope that she likes it. From what I understand she is due to have her baby this spring.

Good news on the work front! Which is a big reason why my progress is so small this month. But honestly, I am NOT complaining. We need me to work! I got a call a couple weeks ago from my in-home care client's husband. Remember, she went into the nursing home in mid=October due to severe weakness. Well, she came home the weekend before Thanksgiving! This means my four days on, four days off with her is back. Also this month on the house cleaning business front I have gained some more clients. I pray we can get the girls nice presents for Christmas!

Another bit of good news! Wes will be home before Christmas. Not sure the exact day, but know it will be before the holiday. He was originally hoping to be home for Thanksgiving, but that didn't work out.

A stitching friend, Mel, in Calgary Canada, has a giveaway going on right now.. You can see her blog and the details of the giveaway by going to: http://epicstitchin g.blogspot. com

Mel is one of the stitchers in a group I belong to that encouraged me to do the HAED pattern.

I was talking with one of my nieces out in California and asked her if she'd like me to do a cross stitch for her. She is a sophomore in High School and plays on the Varsity Basketball team. I told her I had a pattern of a cat with a basketball and wondered if she'd like me to do it for her. She said yes, then asked if I could make the cat the school colors. They are dark blue, light blue and white. I told her that would not be a problem, so now I have another project yet to do!

Rachel's arm has me worried. The doctor took the cast off and put a splint on. She goes back in mid December for a re-check, but her dad and I are worried that it just isn't healing. When she takes the splint off, which she is suppose to do, she complains of massive pain.

Everything and everyone else is doing great!