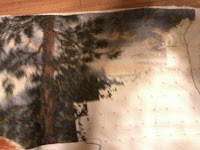 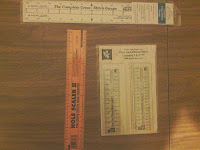 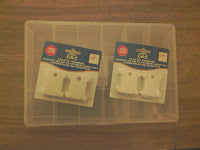 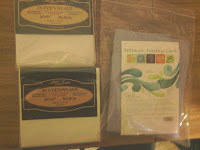 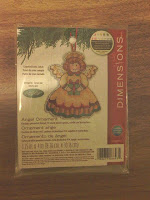 My daughter, Sarah, bought me a new phone! Thank you, Sarah! I love you! Sarah's phone stopped functioning correctly, so while she was waiting for her new phone to arrive, since her phone was still under warranty, I let her use my cell phone. A problem came up with my cell. Sarah took responsibility and replaced it. She got me a new phone, one with a camera, so now I can share all goings on with various things in and of my life! Maybe, this blog will become more interesting! That is my hope, anyway. I told you in my last blog about me getting several different stitching related items for my birthday. I received alot of then from my on-line birthday club I was a member of last year. Last year's club ended with my birthday. I chose not to rejoin the club this year, not because I did not want to, but because things are so tight 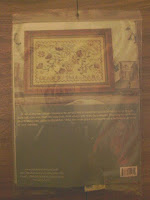 financially, I did not want to be considered a tricky trader if I was unable to fulfill my end of the bargain. Other things I bought myself with some of the money my parents sent me for my birthday. Here are pictures of the stitching supplies and kits I received. I have misplaced the list of who gave me which item, sorry! What I bought myself, courtesy of Mom and Dad, I LOVE YOU, was the pressing cloth, the needle keepers, (one I am keeping beading needles in and the other my usual stitching needles), the orange highlighter, cross stitch gauge, cross stitch hole counter, soft touch thread pic, sea turtle magnetic needle minder, hummingbird fiber hider, split handle magnifying glass, a snag repair needle, scissor sheath, bird and flower magnetic bar, beading needles, round frogging box, traveling ort box, magnetic board w/ magnets and stand (showed w/ pattern sheet page 3 on it), pattern tamers, the magnifying glass cleaner and the box which I can place a picture, the soft pic and beading needles. With some of the money my parents sent I was also able to get a laptop computer. 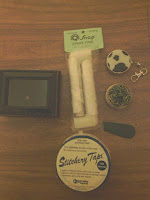 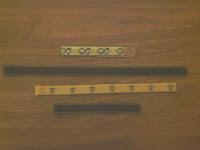 EVERYTHING ELSE – the kits, the pattern books, the needles the thread to do the pattern, “Footprints”, a gift certificate which I used yesterday to buy eighteen 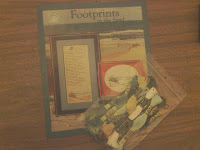 skeins of 3371, a color used a lot in “Life's Little Tangles”. I am on page three and just started working with my third skein, which is the last one I had here. Even if I don't use all eighteen on my project, 3371 is a popular enough color that I couldn't go wrong by having a bunch of it. I also received a tacky bob, some beads, material, material scissors with safety case, a counting pin, stitching tape, the blue highlighter, counting guide thread, bobbins, floss box, clear view stitch counter, a stitching gauge, a Lizzy Kate CD with several patterns, (no picture), a pattern from Little House Needleworks called”Bear Tree Forest” (no picture), more needles (no picture), frey check, the orange highlighter, the red and white washable lint roller, the boo boo brush and boo boo scissors. Evalina, for some unforeseen reason I did not open the bag all the way so I ended up not noticing everything you gave me until today! I feel like a dummy! If I actually missed listing something you all bought me, I apologize. I know I got pictures of everything, except what discovered today have been stitching on "Life's Little Tangles" every chance I get. I have about 75-80% of the patch covered. I know last blog update I said I wanted to wait on a picture to show you until the patch was completely covered. I have changed my mind. Part of the patch is in the upper left corner of page four of the project. I was getting a bit confused, so I decided to halt on the patch area for now and work on completing page three. I think once I complete page three that the upper left corner of page four will be easier to complete. I like the progress I have made on page three since I stopped focusing just on the patch area. What I may do, as far as completion of the patch area, is go down far enough on page three that I can tackle the area by going from a section below the patch and work my way toward what I have stitched. The area you see sticking out by itself of the light color is the beginning of tackling it that way. The red guide thread really does help a great deal on this project. Since I took the time to add the guide thread, it seems like I am moving faster on the project. I am till not as far as I wanted to be by this date in working this project, but I am trying to remember that I did lay it down for a bit because of the uncertainty of handling the hole and then the hole getting bigger and bigger. :( Then there was the fact that I had a good amount of work there for awhile, the holidays, and more! 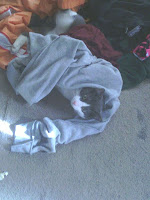 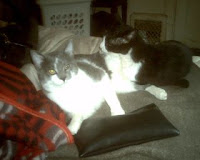 .We have two dogs and two cats. We can tell that our cat, Charlie, who disappeared in February of 2012, right after he turned This picture is of our youngest cat. I was gathering laundry to wash and he decided to play in the pile as it was being gathered. We went through a few names before we finally settled on Rascal he was born in April 2012 and we can tell Charlie is his father. We have seen Charlie around the neighborhood, but we cannot get him in the house anymore. That makes us sad, but at least we know he is alright. Charlie is the gray and white cat in picture of the two cats . He is with Boots, our other cat. 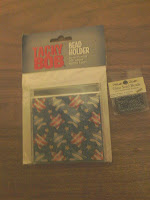 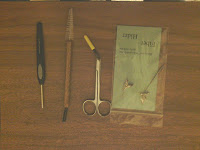 Charlie and Boots had a neat relationship. I am uncertain how old Boots is. We got him from the Humane Society four, maybe five, years ago and he was an adult then. Charlie was born in my bedroom closet. His mother had come in our basement to get out of the winter weather and then couldn't get back out because she was near the date she would birth her kittens. When we found her, Sarah was on the back porch, heard a cat meowing and looked at Boots because he was there too. Boots mouth didn't move but Sarah heard another meow. She opened the basement door and there was this very pregnant female cat. We could tell she had come in the basement window to get out of the cold and snow. We decided to allow her to birth her 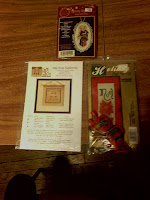 kittens here. We discussed keeping her but getting rid of the kittens, once weened, but chose to keep one kitten instead because the momma cat would attack, with not being provoked,  would attack the other animals we owned. She had six kittens all together. They were all her coloring, except Charlie. Every other kitten was black and white. Charlie was the last one born. We gave all the kittens away when they were weened, except Charlie, and took the momma cat to the Animal Shelter. Boots allowed Charlie to nurse on him, and they cuddled often, but now  Charlie is having too much fun being an outdoor cat to come home!I,

Sarah and a good friend of hers had been talking about splitting the cost of an apartment or house. They started looking around in December and started gathering the things they would need. In late January they signed a rental agreement on a two bedroom home not too far from our home. There were some issues right away, because the basement flooded, causing the heater to need repair and the landlord tried to say it was Sarah and her friend's responsibility. Sarah knew better. She asked her dad what to do. He told her to tell them she was going to get hold of an attorney and gave her the name of a firm. Sarah did that along with giving the landlord dates when things happened, on paper. Suddenly, the landlord took care of everything properly. Imagine that!!!
Jack and I celebrated our twenty fifth wedding anniversary on Valentines Day. First we went to Champaign and bought me a new dress to wear to dinner. He and the sales lady at JCPenny looked around and found a very nice dress. When we came back to Danville, we went home and Jack started getting ready for the evening and I went and got Rachel from school. When I got back with Rachel, Jack was rea dy for the most part. When he was completely ready, he and Rachel went and picked her up some Chinese food (she loves it) and rented a movie. Shortly after they returned I was ready to go. Jack got a big box he had hidden away and we took it to dinner with us. We went to Montana Mikes and both had salad, baked potatoes and steak. We also had a glass of wine, in the glasses Jack brought in that box – absolutely gorgeous – and then shared a dessert called a Rocky Mountain Mud Slide. It was delicious. We then went to the lake for an hour or so and reflected back on the last twenty-five years and necked. When we came home, Rachel was asleep and we ended up staying up til midnight, talking even more and cuddling. 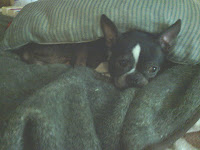 The glasses Jack purchased are Champagne flute style. They are clear glass on top with silver stems and base. He had the store engrave entwined hears on them, inserting my name in one and his name in the other. He also had the date we married (2-14-88) and the twenty-five year date (2-14-13) and 25 years engraved. I had no idea he had done this but was very happy! I can honestly say I have been married to Jack for half my life – being that on my birthday in January I turned fifty – and I am very happy!! 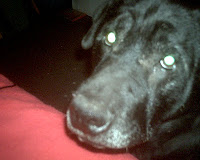 Baybee Gurl and Capain are our dogs. Baybee Gurl is the Boston terrier and Captain is the Shar Pe. I downloaded a couple of pictures of them, but I will tell you more about them next time.Happy Stitching everyone!
Posted by Lyn at 3:55 PM