Stitching News and Other Stuff

Hello Everyone! Once again I took longer than I intended between updates but I believe I have made a decent amount of progress on "Life's Little Tangles". I apologize if the picture is a bit blurry, but I think you can see it better if you click on it to make it bigger. Not sure about that though. I am nearly done with page three. I'd guess I have somewhere between 625 and 650 to complete page three. I only have 14 more stitches wide to go, and from the bottom to where I started easing over on page four for the repair is about 5 squares of 100 stitches each. I feel pretty good about how its looking and I believe I'll be able to finish repairing the patched area without a problem. I think with me tackling that area from the bottom up it will work great. At least that is my hopes. My mom told me last week she and dad are amazed at my stitching. I didn't really respond to her at the time, but  am thankful they feel that way. I love stitching so very much and it relaxes me beyond belief!

I haven't touched the other project I am working on for a couple of months, even thou I'd say I am somewhere between 85 and 90% done. That is a bib I am doing for Wes's sister who is due to have a baby this spring. I guess I have been putting all of my efforts in the repair of "Life's Little Tangles" so that one just got put down. Maybe I'll start working on it again soon. I really did want to give it to Wes to give to her before the baby is born.

Sarah has put in some projects for request that she wants me to do for her house. There are a total of four; all of them with someone riding a horse: barrel racing, roping, and so forth. She said If I get all four pattens, she will stitch two of them. I taught her how to stitch several years ago. She does have several projects 'under her belt' completed, but has not stitched in a few years. I know she will do great on them. She absolutely loves horses!

I also taught Rachel to cross stitch a few years ago. She hasn't done near the number projects as her sister, but Rachel asked me last week if I had something she could stitch. I told her I had several kits, which meant it included everything she'd need. She looked through my kits and found one she liked. She became a bit frustrated trying to separate the threads out, similar colors and such, but I ended up helping her with that. She started on that project that night, but I don't think she has touched it since then. I am hesitant to ask, because I don't want her to feel nagged into stitching. Maybe now that Easter Break is here, she will take some time too stitch on it. 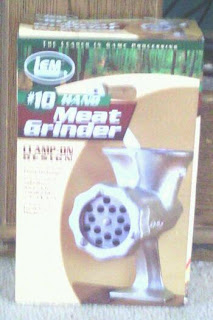 This meat grinder is a gift we got Jack for Christmas. He is a very good cook! Jack is the kind of cook that can 'taste' how the meal will turn out in his head. He has been wanting one of these to make his own sausage and such. A few weeks ago he used this and made some boudin with chicken. That one he did follow the recipe in the Cajun Cookbook he has. I have not eaten much boudin over the years, but I'll have to admit this was very good! I am so lucky to have a wonderful cook as one of the many qualities of my husband! For Saint Patrick's Day he did make Corned Beef and Cabbage too. He didn't make a very big batch of it though because he knows that is not the girls and my favorite. I think one of my favorite things he makes is buttermilk biscuits and sausage gravy. He make a wonderful pizza as well!

I have been hitting the neighborhoods again because I have lost some house cleaning clients for various reasons. A couple people said they'd call me in what is this coming week. I sure hope they do because our car is having bearing problems. We need to figure out a way to get it fixed because it is getting to the point of unsafe to drive. Please pray that these new clients come through. Between yesterday and the day before that I probably handed out 200 fliers introducing myself. It is suppose to be warmer (a bit anyway) Saturday than it is today so will probably walk again then. I thought about walking today after completing my client this morning, but then realized the temperature was 31 and with the wind it
felt like 22. Too cold to go door to door. But spring is on its way. It snowed a bit last night, but by mid morning the only places there were snow was in the shady areas.

We are talking about putting on a Customer Appreciation Bar-Be-Que in May to show my customers how much we appreciate them. We are discussing inviting even the couple of clients who had to cancel because of circumstances beyond their control. We won't invite the two jerks that I ended up quitting. One I just could never please no matter how hard I tried and the other was coming on to me, which made me very uncomfortable.

Our last  'big' snow storm here was at the beginning of the month. In this storm Chicago got nearly a foot. We are 139 miles south of Chicago. We got 3.3 inches. The top picture was taken from inside my house during the storm. I was looking out the window on the back door. The picture below was taken from across the street from our home. The picture is our
humble abode.

I introduced you to Babee-Gurl and Captain, our dogs last entry. Babee-Gurl hates the snow. She is our Boston Terrier. When she goes outside to do her 'business' she finds the spot with the least amount of snow possible.

She is actually very lucky to be alive. Last summer when we let her out to do her night-time 'business', she went a did a very goofy thing. She went and chased a car and ran into it and bounced off the car. We took her to the emergency vet and it turned out all that was broken on her was her pelvis. No surgery need. She stayed in the hospital two nights and then was able to come home. Now she has a weak bladder, so she needs to go in the middle of the night, but if we keep her in our room at bedtime, she will wake either Jack or me up. If we don't, it is possible that she did an oops in the kitchen or dining room.

Captain and Babee-Gurl both turned eight in December. Babee-Gurl was born in early December and Captain was born right before Christmas.

Captain is very loving yet protective. He will give you a kiss and come to you for hugs and petting but if he senses that someone is going to hurt his humans, watch out! We have discovered over the years to listen to Captains instincts about people. There was a couple of times we were talking with someone in the alley behind our home and we could tell he was not happy. We went ahead and looked up these people's names and discovered they were criminals!!