It Has Been a LONG time!

It has been a VERY long time since I have updated my blog, and I apologize for that. I have at least three drafts on my blogger dashboard of here I started to update the blog and then things happened and I was unable to post it that day. (GRRR!) I may take bits of info out of those started blog posts and make this blog complete.

I do apologize for not being around  for the past few months except an occasional post on a couple of my groups. Lord willing, that will change. :-)

I was working on the HAED project, ("Life's Little Tangles") for the longest time, trying to repair that what started out as a small hole. It wasn't working (the hole was getting bigger and bigger) and I was getting very frustrated with it. I finally put it down before I cut the project to shreds, unsure what to do. I started stitching on a couple of other projects and framed some completions (pictures will follow). I thought  maybe I could do "Life's Little Tangles" over one. NOT!!! I couldn't see the squares properly to even put my guidelines correctly, so how would I see to stitch the project? I had figured out I had enough of the 25 ct material I'd purchased to do it over one if I did it over one  instead of over two, but it was giving me a headache. I had only completed three pages of the twenty-four page project. Cross stitching, for me, is fun and relaxing and trying to put in the guidelines for over one was anything but relaxing and fun!! It meant I had to order a new piece of material the proper size, so I did that a couple of days ago. It should arrive by next weekend. 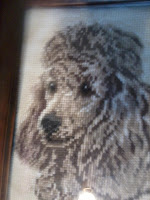 When I ordered the new material for "Life's Little Tangles", I also order a light pink shade to put a 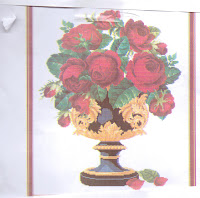 pattern I have been wanting to do for my Daughter-in-Law that Dickey from ILCS gave me called "Roses in a Black/Gold Cup". That project model picture is to the right. My Daughter-in-Law has no idea I am going to do this for her. I know she loves roses, so I thought this would be the perfect project for her. Thank you, Dickey, for the RAK! :) 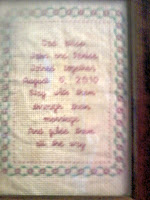 I have been meaning to frame a couple of projects I did a while ago, and with Jack's (thank you, Sweetheart) help that was done recently. The poodle I did shortly after our  beloved Petro passed away. This picture looked so much like him, I could not resist! I now have it sitting atop my china hutch.

We also finally framed the project I did for my step-son and his bride shortly after their marriage three years ago. I wanted to give it to them framed. (Pictured Left) I know especially the one I did for John and Denise is rather blurry, but I do not know how to fix that.

I also framed the completed "Zoo Babies" for my great-nephew. He will be two in December, but his mom has seen pictures of it and understands. (Thanks for your patience with me Danielle). I don't have a picture of it framed. :(

The two projects I have actually been stitching on lately is a wedding gift for my cousin's son, who is getting married summer of 2014 and a wolf for my daughter, Sarah's, boyfriend. What is pictured to the right here is the wedding gift with page one completed. I had started page two and probably had it 1/3 done. The part of page two I had completed was a row, all the wat accross of pink roses with green leaves. I realized as I put in the last couple of stitches of this section, I had put it over one square too far to the left, so it would not be centered (GRRR!)  I am sooo very glad I got the boo-boo brush and scissors and soft pick! It took me a good two days to get all of the roses section frogged, but I did it with no

harm to the material at all. I got those either for my birthday or with my birthday money. I have the roses about a third stitched again already.

Sarah's beau, Chance, is a very nice young man. Jack and I are very impressed by this hard working young man. This past week he repaired the walls of our shed. Two walls had gaping holes in them and needed replacing. He replaced all the walls so it would look uniform. and repaired the roof of the shed as well. The materials were not that much. He will put new doors on it soon. After that he will paint the whole thing. We also had a problem with the van this week and he helped Jack with that. What was wrong was the power steering pump went  out. Fortunately the van had just pulled in the driveway when that happened so everyone was safe.

Today, as the van arrived in Hoopeston to go to the Sweetcorn Festival the coolant hose went out. We had to have the car towed home. Being Labor Day, no one is open. Jack will fix  that tomorrow. Sarah and Chance had asked if they could take the van, since it gets better gas mileage than her pick-up.

I have been working steady at my self-employed house cleaning. I have gained a couple of clients, which is good, but what is even better I received a call from the printing company, at the end of last week, to which I'd turned my card into to get on the list of people who want to be printed on the paper place-mats that go to various restaurants in the area. As of yesterday, I am on the place-mat! Now, hopefully, my business will pick up even more clients!


Now to give you a summary of what I'd started to post earlier. I finished a baby bib for Wes's sister and gave it to her a week before her son was born in late May. I do not know why the picture of it is sideways here when on my pictures it shows from the top.

Sarah graduated from High School and Rachel was promoted to High School. School started for both of them last week. Sarah is at the Junior College, studying to be a CNA and Rachel is in ninth grade.

We planted several types of flowers this spring and a few small pine trees. The yard looked wonderful when everything was at its peak!


Sarah is showing her love for animals. A couple months ago, she told a woman who is having medical issues she would take care of her cat for her. The woman thought about it and had Sarah get the cat. The cat, who evidently was suppose to have an issue with men, doesn't anymore. Sarah has a couple of young men as friends, one of which is her boyfriend, and that cat jumps from lap to lap, purring the entire time. She also found a puppy in her neighborhood who was lost. She brought it in her house, bathed it, and looked at its tags, which had the owners number on it. Sarah kept it safe in her house until the owner returned home from work. She also has a dog of her own. 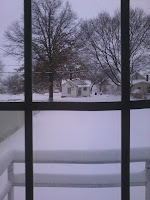 should be. In a big snow storm for us we average four to five inches. We usually get one to two though. The final storm of the season, Lord willing, was a whopping twelve inches in twenty four hours! I felt sorry for Babee Gurl, she was in it up to her belly and she hates snow! The snow storm happened in late March. This picture is the view out our back door. Fortunately it was gone in three days. (Now summer and fall are having that argument).

Jack replaced the bearings on both sides of the car this spring. He had to borrow our next door neighbor's pulley to get the part off and on, but other than that he was able to do it by himself. It took him a good part of one day to do the first bearing but the second bearing, done the next day, didn't take near as long, probably because he knew the exact steps better. We also got new tires and the car aligned this spring. 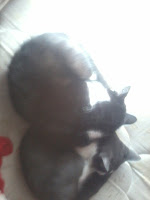 Rachel played softball this summer. She played first base and did very well. We were very proud of her.
We had our cat, Rascal (AKA Stinker) neutered a month or so ago. He was one year in April and had been spraying everything! We took him to the low cost vet place in town and we were able to use some of my house cleaning earnings to take care of the cost. Rascal is the gray one, Boots is black and white. Boots is recovering from a sore of unknown origin.
Well, I believe I caught you all up on the happenings around here. Please let me know what you think of my projects or whatever else you feel like commenting on.
Posted by Lyn at 5:32 PM