My Stitching Has Increased!

I hope everyone is doing well. The doctor has managed to get m y joint pain under control, thankfully! I still have the bicep pain that I have had   since a  fall I took in mid-January. I spoke with my doctor again about the pain and she has scheduled an MRI for me tomorrow morning at seven in the morning. Since my joint pain is under control though, I can stitch without pain! :) Since stitching is my therapy, so to speak, there is no way I would have stopped it anyway, just slow it down. I have managed to do quite a bit of  stitching lately.

The picture in the top left corner is my wedding present to my cousin's son and his wife on their wedding day in June 2014. I'd say I am at least 90% done with it. What I have left is the last section at the bottom that is of blue ribbon and bells  and a couple of small flowers and the bottom border line. I also need to backstitch page two and fix the "A" in RANDY. It somehow came loose at the top. 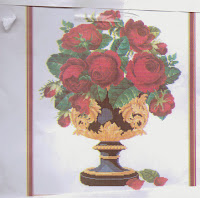 Another project I have been stitching on is the Rose Bowl for my Daughter-in-Law. A stitching friend who lives in the Philippians sent this to me. My DIL loves roses and I thought it would be perfect for her. When I ordered the new piece of  fabric to restart "Life's Little Tangles", I ordered a piece of light pink laguna material called 'Angel's Blush' and am putting the red roses pattern on it. Before I restart "Life's Little Tangles" again I am going to grid the pattern 100%, not just a page at a time. I actually started working on the roses just about three days ago.

I have not stitched very much on the wolf in the past few weeks, though I did get a bit done. I cannot show you it though in case the recipient pulls up my blog.

I have some good news regarding my husband! Three years ago he had to have the lower part of his left leg amputated because of a diabetic ulcer. The prosthetic leg that was made for him was very painful, so he used it very minimally. Recently he decided to try and go through the Veterans Affairs hospital to see if they could help him with a prosthetic that would fit better. They have been working with him, and the last time he saw them, he tried on the leg they made and actually took a few steps...pain free. He goes again in a couple of days and if everything goes right, he may leave this time with a working leg.

Sarah has been doing very well in her classes and is now CPR approved. She has been making top grades in her class. Needless to say, we are very proud of her. Her hours at her job have increased, which makes her happy. The picture to the left is Sarah and the young man she has been dating since early February. He is a very nice young man and has done Sarah a world of good.

My younger daughter, Rachel,is doing well too. She asked Christ into her heart and she is keeping busy with school.

This summer Rachel went to San Antonio, Texas with the church youth for a youth convention. She had a great deal of fun. She was gone an entire week. While she was gone, Jack and I went camping for a couple of nights. That was the first 'us' trip we have had since our Honeymoon in February 1988. We had a blast!

Saturday night Jack and I had a candlelight dinner while Rachel was at a friend's. We decided we are going to start doing that more often.

Happy Stitching everyone!
Posted by Lyn at 1:30 PM