Wow! I have been very busy the past few weeks! I had wanted to spend more time on the computer, especially when Jack and the girls were in Dallas, but that idea failed when I discovered that one of the girls had somehow jammed the keyboard part of my desk in and I couldn't get it unstuck! Believe me I tried! I was able to spend a few minutes here and there on the computer while they were gone, but I had to have the keyboard either atop the desk or on my lap. When it 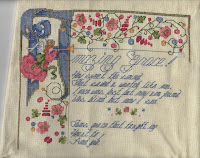 was atop the desk, it was too high to comfortably use, when on my lap, too low.

I did manage to get in a lot of stitching on 'Amazing Grace' while everyone was gone. Since Jack and the girls have returned from Dallas, I have managed to stitch on it as well. In late August I did a big part of the green vines and outlining of the green leaves at the top as well as the gold on the right. (I originally back-stitched the gold on top in green and then realized that it should have been done in blue so I have frogged most of that.) I have stitched the progress on this project in September, so I feel good about my progress. As you can see between

the two pictures (the first scanned in late August and the second scanned September 22) I have managed to get quite a bit of stitching done on 'Amazing Grace' during September. I really believe that if I am allowed to sit and stitch, I'll be able to get it completed by the time I go to California in the end of September. My flight is on the morning of September 28. I will be in California until October 8. I hope to get the 'Precious Moments' pattern done too, but I am uncertain if that is possible. Then again, "All things are possible with God!" My hope is that if I cannot finish one or both patterns before I get to California that I'll be able to finish them while I am there.

Jack and the girls did enjoy themselves a great deal in Dallas. Jack told me the girls behaved themselves on the way down, but on the way home it seemed like one big argument. He said he was so glad that he went. He got to have some serious reconnect time with his sister, which was needed.

Both girls are doing well in school this year. Earlier this week we received their mid-quarter report cards. Rachel has straight A's and Sarah has all A's except in Chemistry and PE. In those classes she has a B.

The central air was installed a couple of days before Jack and the girls returned from Dallas, and is working fabulously! The people who installed whatever necessary to make the basement no longer leak did that a few days after the return from Dallas. We have had one major rain storm, and that was the night after the system installation completed, but the ground was so dry from lack of rain, no one had any flooding. Usually this time of year people are having to mow their grass a minimum of once a week to prevent it from getting too tall. However, that isn't the case right now. I mowed a day or two before everyone went to Dallas and then not again until August 27. I didn't mow it again until last weekend (September 17).

Jack and I bought a new washer and dryer in late August. They were delivered August 30. My dryer has been acting up for awhile and finally just stopped working altogether a few days before we decided on getting the set. My washer died just before the Dallas trip. We looked into getting a used set, but we also wanted one of the washers that doesn't have the agitator in the middle. We could find no used sets w/o agitators. We also talked about if we got a new set, we wouldn't have to worry about breakdown for a long time to come. I believe it is a very good investment.

Also, we have been painting the outside of the house the past few days. The last time we painted the house was a bit more than 12 years ago. I was pregnant with our 12 year old at the time. We painted it Snickerdoodle yellow at the time. Now we are painting it white. It will be trimmed in dark brown. That 12 year old has helped a great deal with the painting. Our 16 year old has helped too, but she wasn't here as much. All of the stucco is painted white. The basement wall and porch are what will be brown. That is near completion. I'd say another few hours of painting and we will be done.

Wes graduated from boot-camp on August 26 and is now at AIT, which is where he will learn to be a mechanic. He is now stationed in Missouri. He will get to come home for the first time since reporting to boot-camp in late October. The countdown is on. We all want to see him. Wes found out last week where he will be stationed when he returns after his time off in late October. He will be going to Korea. He is a bit nervous about that but I think he will be fine. He's not sure how long he will be gone overseas, but he will find out soon, if I understand right.

Jack's birthday was The last weekend of August.. He went and smoked a piece of meat on the smoker/bbq that was given to him for Father's Day. It turned out wonderful! We had some of our best friends over and had a wonderful time. Jack isn't normally big on birthday celebrations but I got the feeling he was happy we had this one.

The one sad thing that has happened recently is on the night of August 20, our little Boston Terrier either ran into a car or was it by a car. I had let her out to do her final business for the night, and she ended up darting into the street. She severely broke her jaw and had a hairline fracture of her pelvis. No other injuries. She was very lucky. We took her to the emergency vet and she was hospitalized for 2 nights. The night it happened and the next night. Her surgery was Monday, August 22 in the morning and she came home later that afternoon. She had to eat soft food until last week. Her jaw is still wired. The wire will be removed in late October. The hairline fracture of her pelvis has healed without any issues. She is back to her jumping all over the place self. It is good to see. Now we just hope she has learned to not run in the street! One of the things I really want to do is put a fence around our back yard, but we just haven't been able to afford it. I am hoping we can find the funds to do that soon though!

Rachel is involved in cheerleading again this year with one of the local youth football teams She is a varsity cheerleader on the Chargers. Jack is 'Uncle Stumpy', the voice of the Chargers again this year. The first year he did the announcing for them was last year, the same year that was Rachel's first year on the squad. Rachel can be on the squad until she reaches high school. Jack is thinking he'd like to stay announcing even after Rachel is too old to cheer. I think it is very good for him. It gives him something to do and he loves football.

Sarah is looking forward to getting her driver's license soon. Here in Illinois the teenagers must have their driving permits at least 9 months and log at least 10 hours at night and 60 hours during daytime hours before they can even try for their actual license. She reached the amount of hours a long time ago and her nine months was up September 9. She is anxious to go down and get it. She will probably go down next week after I am in California. She is a pretty good driver, though she does drive me crazy sometimes, trying to tell me how to drive. I have been driving a lot longer than she has. One day hopefully she will realize that mom does know how to drive. She will turn 17 in mid October. I know she is at the age when she knows everything and mom knows nothing.

I have been getting ready for my trip too and feel just about ready. I need to go to Champaign a bit later today and get my brace adjusted. It seems like I am dragging my foot a bit and I want to get that fixed before I go. I have also trimmed my hair about a week ago. I called my doctor and had them submit a refill for my meds so I'd have enough for the trip and ended up going to the doctor because I have a constant humming in my right ear right now. It has been going on since my last cold (the beginning of September. There is fluid in my inner ear. It isn't infected fluid, just fluid. The doctor put me on a nasal spray and said if it doesn't help by late October that I'll have to go see an ear/nose/throat doctor and have to have a tube put in the ear again. I had one in the ear before and it has fallen out somewhere along the line.

Well I hope to post pictures for you when I get back from my trip. I recently found our 35mm camera and plan on taking it with me. Thanks to everyone for your patience with me. I will try and be better in updating this blog and staying in touch with my groups, but I have to get back from California first. Take care everyone!
Posted by Lyn at 11:18 AM