What A Great Vacation! 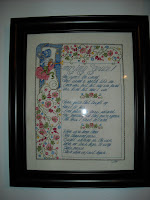 My vacation to California was wonderful! I managed to frame "Hunting Dogs", "The Lord's Prayer", "Isaiah 40:31", and "Amazing Grace".

I gave "Amazing Grace" to my long time girl friend's mom. Mrs. Gardner really loved it. She now has it hanging in her bedroom, Michele told me. She ended up rearranging some things to get it on her wall, but it is up. Mrs. Gardner was very grateful for it and I think she was even impressed. She told me she really likes it.

"The Lord's Prayer" my niece, Brandie now owns. She is a strong Christian woman. I am very proud of how Brandie has turned out. She

has had some issues in her life and has put her faith first and is now doing very well. She has a little boy and girl. The boy is older. I cannot remember how old her kids are, but I think they are in third and kindergarten.

"I had promised Sarah "Hunting Dogs" when I first made it when she was getting ready to turn 13, but had never framed it. I had originally wanted to give it to her for that birthday, but I had to stop stitching for three months that year because I had an issue with my left arm, which of course is my stitching hand. Now Sarah will be able to put it on one of the walls of her bedroom, w 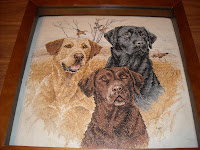 hen it is built. She may choose to put it up now in the bedroom she and Rachel share, but there honestly isn't much wall space there. the picture is in a 12x12 frame.

I wasn't able to finish "Precious Moments Girl", but I did make quite a bit of progress on it. I was able to work out with Danielle, (my niece, and mommy to the baby the "Precious Moments Girl" goes to) the proper color for the skin of the girl. The skin is now as close to the baby's skin color as is possible. We put the thread colors against her skin and combined DMC 3772 and DMC 435. I was able to finish the quilt completely while in Fresno. I did all the 'skin' of the girl while in Fresno as well. I did the white of 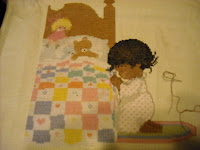 the nightgown on the plane ride home. The pink of the rug that was not completed as well as the pink and light grey of the nightgown I have done since I came home last Saturday. The only thing left to do on this project is the backstitching. I started backstitching a day or two ago. The wording of the phrase is in backstitch as well, thus I'll do it when I adjust the picture to do the upper part of the picture. The bottom of the picture looks dark because there was a shadow, unknown, when the picture was taken. Hopefully when the next picture (probably the completed picture) is done there will not be a shadow. I bought a frame for "Precious Moments Girl" but I left it in California. I'll send it to my mom when it is 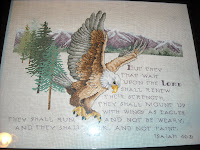 done and she will frame it and take a picture of it for me. Danielle found out while I was there that she will be having her second child in February. Sounds like I have another baby project in my future! (LOL)

I also framed "Isaiah 40:31" while I was in Fresno. Jack is very happy with it. It will go on our bedroom wall, probably over by 'his side' of the bed.

I am going to have to start thinking pretty soon about what is my next project? My Dad bought me a book of nature animals (it has an elephant and my Uncle would like me to do an elephant for him), the next baby project for Danielle, or a different project...who knows?

My class reunion was alright. Not as many of my class mates showed as I hoped would. My graduating class was 577. Only 81 of us showed. It was a lot of fun though. I was able to reconnect with a couple of people I considered excellent friends in high school. I even exchanged e-mail addresses with them.

I went to a couple of movies (different days) with a classmate that was more like a great protective big brother than any classmate! We saw the "Lion King" in 3-D and Money Ball. We also had dinner. Thank, Jeff! :)

I was also able to reconnect with the person that was a great friend to me before Jack and I married. She was my Maid of Honor. We lost track of each other after I moved out of Fresno, but I looked her up when I was in Fresno and we went out to lunch and exchanged information. She told me that she is a newly wed. Jack and I are so happy for her. I was so glad we were able to reconnect, Gail! :)

My mom and I went to Santa Barbara and visited my Dad's cousin. She is doing very well. She told me she would love to have my "Footprints in the Sand" project. She wants me to send it to her and she will turn it into a pillow. She will send me a picture of it when completed. I really enjoyed seeing her. The last time I saw her was the day Jack and I married. That was over 23 years ago.

Dad, Mom and I also went to Carmel and went to the Aquarium, and Fisherman's Warf there. Dad bought a very nice lunch. I bought various gifts for my friends and family in Illinois. I took pictures of the ocean for Jack while we were there. He said if there is anything about California he misses, it is the ocean. 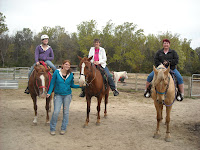 My friend Michele flew out here the same day I flew home and has been here since. She flies home next Saturday. Sarah led Michele, Rachel and me on a ride out at Thunderwolf earlier today. We all really enjoyed it. In this picture, Rachel is wearing the helmet, something Thunderwolf requires for children 13 and under, Sarah is standing, me, and then Michele. We had just returned from a one hour ride. Sarah will be 17 in two days. I think she will have a great birthday this year.

Well I believe that is all the info I have for you now. I hope everyone is doing well. Have a great week, everyone!
Posted by Lyn at 2:34 PM