Sarah has had a very good start to her seventeenth year to life, I'd have to say. The Monday after I returned from California, she got a call from Subway 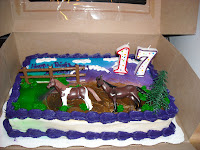 . She had put in an application with them in August. They wanted to interview her. She had me take her to the restaurant for the interview. She was hired and started the next day. Her Dad took her to the Secretary of State's office and she was able to get her driver's license, without taking any tests because she had done so well in Driver's education and had everything in order. The next 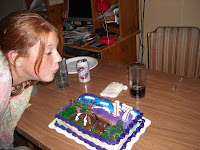 week was her birthday (October 18). We got her a laptop to keep her off of my computer.

Her dad and I had discussed that Sarah needed her own vehicle to get around, especially now that she had a job that she needed to get to. We decided to make it a very early Christmas present. Jack had been looking around for quite awhile for her a vehicle. She had said she wanted a pick-up. We went to a Car Auction and found her a 1990 Ford F150 4x4. It has some rust on the bed above the rear tire area on both sides, but what can you expect for Illinois? The rest of it was nice and clean. We bid on the truck and got it for $850. With Auction fees it was $945. We didn't feel that was too bad. It did end up having some brake problems. Jack replaced the front brakes himself but then we took it to a shop to have the rear brakes replaced as well as a new brake line installed. It turns out that the brake line that was there had a major leak. Everything is good on it now though. It is a safe vehicle for her. I don't have a picture of it yet, but I'll post one later. We want to get it detailed out so the paint isn't dull. Maybe I'll take and post the picture after that is completed.

Wes is home right now, he has to report back on November 11. He has helped with some things related to the truck and has bought a new stereo for it and is going to be putting in bigger speakers today when Sarah gets home from school. She has to go to work at 5:00 today and work til 10:00, but then doesn't work again until Monday. She was called yesterday because someone had called in sick, so she ended up working 4:00 to 10:00 last night. Though she really didn't get off til closer to 10:30.

Last week Sarah got her first check from Subway. It was only for her first week of work there, which was only 11 hours, but she was still in shock about how much it was. She was very happy.

While Michele was here I did some beautification of my yard. I planted two light purple mums in the front and 5 mums along the driveway side of the house. Two of those mums are a dark purple and three are yellow. I am not sure how well they will fair, as my dad is really the herbologist. I have always wanted flowers, but my thumb is more brown than green. Hopefully I will not kill these plants. I know I'm suppose to do something to these plants for them to be able to revive this spring, but am uncertain what. I also planted several tulip bulbs in these flower beds. Yes, I did roto-till and weed both beds before I planted anything.

On the stitching front I have been doing an elephant that I am going to give my Uncle.

I had a frustrating time at the beginning, I had stitched quite a bit of the first color and moved on to a second color. Then I realized I had gone up three instead of two on a particular row, so I had to frog probably half of what I'd put in. I did get all that corrected. I am stitching the biggest elephant in the pattern. This is the only one "facing". The others are side view. and further back. I am not sure how long it will take to stitch this, but I don't think my Uncle Curt is in a huge hurry for it. I know that he wants it as a memorial for my Aunt Jane. I may see if I can give it to him on what would have been her birthday next year. That gives me quite awhile to work on it. It is a pretty big pattern. Three pages total.

A stitching friend in one of my groups is selling me some nature and animal Stoney Creek pattern books. I have a couple out of those I'd like to stitch as well. Sounds like I will be starting a rotation of some kind.

Rachel's cheer leading season is over. This past weekend there was a cheerleading competition and her team came in third in all categories. She is uncertain at this point if she wants to cheer next year or coach. Her dad and I would like her to see if she could get on the school cheer leading squad.

Well, that's about it for now. Take care everyone!