I Have a Couple of Announcements....

Hello, Everyone! I wanted to announce that I am going to be having a couple of giveaways. When I reach 100 followers (I have 87 now) I will be having one giveaway to give away several sizes and shapes of wooden embroidery hoops. I will have a second giveaway that will have some patterns, and maybe some floss and a couple of other things. Have not completely decided yet. Will let you know more about both giveaways when I reach 100 followers.

Here is the progress I have made on Irises this week. You can see the flowers much easier since I did the backstitching around them. I now have the length of the project completed. I don't think it will be too much longer before I am done with this project. For the most part it has been a fun stitch. I went and tried out some of my newer threads in the stitching. A blue satin and a yellow light effects. I think they turned out great. The satin threads are very soft, but not hard to stitch with.

I saw some scissors on nordic needle that are specifically made to cut metallic thread. I am thinking of ordering them. Do any of you have a pair meant for metallic threads? Are they worth the price? I was thinking about getting them because I have found myself stitching with metallic threads here and there and don't want to ruin my scissors.

I am getting a pattern of red roses in a vase or bowl of some kind from a fellow stitcher. I am excited. My daughter-in-law loves red roses and I have been looking for a pattern I could do for her. When I saw this stitcher had a pattern, I asked about it. They are sending me the pattern and I sent them a gift certificate to 1-2-3 Stitch. I don't know how big this pattern is but I am sure I will love doing it.

I need to start on 'Creation' cat for Jan. I want to get that done soon, but I also want to finish Irises for Mary-Beth and even the elephant for my Uncle. And then there is the HAED pattern, but I still need to get a printer that does more than scan. So many projects to do!

Irises is the only thing I stitched on this week. I wanted to get back into my routine of working out at the YMCA. I have been doing that. I haven't gone everyday in the last seven, but I have gone several. On Friday I swam 32 laps. That is only 4 laps shy of one mile. I wasn't feeling the best yesterday, but made myself go. I ended up walking on the treadmill. I didn't go very far (only about .84 of a mile) but I can say I did work out. Today I swam 23 laps. 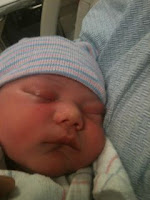 My niece, Danielle, had a baby boy last night. She named him Khaleb and he weighs 7lbs 10oz. and is 21" long. I just spoke with Danielle and she sounds wonderful. She said the labor was relatively easy. From the time of arrival at the hospital to the time of birth was about three hours. She said he does eat a lot. She will be staying at the hospital tonight too, not because anything is really 'wrong' with either of them but because her doctor wants her to be able to rest a bit before going home. Daniele has a 13 month old too.

Sarah went to the eye doctor last week and ended up needing a new prescription. We got one pair that day because I paid for them but we also ordered what we are calling 'the back up pair' because the ones the insurance will pay for are not going to be here for 6 to 8 weeks. Sarah's glasses had broken and she needed a new pair now, that was why I paid for the first pair. I really need to see about getting me a new precription too. I have been able to tell for the past while that I need new glasses.

Jack is doing okay. He made the front page of the local paper last week. The article was about how the city has helped disabled people improve their homes to make it easier for them to get around their homes.

I intended on being home when the reporter was here, but we were having car trouble at the time and so I wasn't here. The night before the reporter came over, we ended up at the Emergency Room with me. I was transported via ambulance. Jack was worried that I was having a heart attack because of where I was having sudden pain that wouldn't go away and having a hard time catching my breath. The hospital released me a few hours later. They did run all the heart related tests and said I did not have a heart attack. When Jack and I went to the car after my release, it would not start. A friend of ours happened to be visiting a friend of his. He took us home. I got a ride back to the hospital the next morning and security tried to jump the car. It would not come to life. I hjad it towed to the shop. They replaced the starter which got the car running and then also fixed the master cylinder, which made my brakes work properly again.

Rachel started practicing with the jazz band after school last week. She will be playing the piano in this band. She is pretty good. She has been playing the piano off and on since she was six. She plays the eliptical in the regular band.

I joined the bell choir at church last week. We practice every Wednesday night at seven o'clock.

Well that's about all I have to announce this week. Hope everyone has a wonderful week. Take care!
Posted by Lyn at 9:39 AM