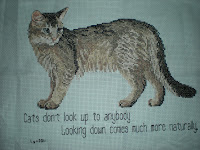 I know, I know, its about time! Sorry it has been so long since I updated my blog. I have been wanting to update to the point that I was probably driving Jack crazy. Sorry it has taken so long to update, the last time I updated was a week or so before Thanksgiving, but I really wanted to be able to post pictures with the blog. My printer/scanner was acting up and I don't have a decent camera, so I was unable to take or scan pictures myself.

This picture, "Looking Down" cat is the one I did for my cousin and his wife. I finished it about a week before Christmas and mailed it to David and his wife and asked them to e-mail me. They were very pleased with the picture. They sent me the picture right around my birthday but Jack had been telling me he was going to see about getting my printer/scanner fixed, so was trying to wait till I could post more than one picture. Just yesterday Jack got the printer/scanner to the point that it will scan pictures again. It prints, but not properly. The color is all askew. This means I won't be able to print out my HAED that I bought, which is disheartening. :( I have other things that need printing too, but those of you who have done or are doing HAED know how important it is to print out those patterns. This is a actually true for any patterns you buy on line.

I still do not have a picture pf the Precious Moments finish I gave to my niece. I am hoping she 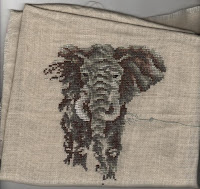 will send me a picture of it soon. When she does, I will post the picture, I promise!

I have been working on three other projects since my last post as well. I worked some more on the elephants for my Uncle Curt. I am actually almost done with this bull elephant. When he is done, the project is probably close to 45 or maybe even 50% done. The other elephants and then the trees and bushes in this pattern are very small in comparison to him. I am doing the elephant on 28ct, which isn't a problem, but it isn't the type of 28ct I have used before and it almost seems like the material is not 'uniform'. It is very frustrating. I like the evenweave much better than this stuff. I am concidering stopping the elephant where it is and then starting all over on a different piece of material. I started to do some of the background bushes (which are a half x) and it looks like I have pulled the stitches wrong somehow, but I know I haven't! GRRRR! 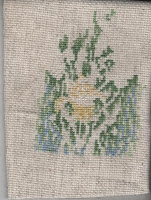 Rhode Island. We started writing each other as pen pals through Girl Scouts when we were in fifth grade. Several years ago I stitched her and her husband a wedding announcement. A couple of years ago they ended up in divorce. She asked me if I wanted the wedding announcement back. I told her no. I told her I'd be happy to make her something else. That was when she told me that she likes irises. A couple months ago I bought a book from a fellow stitcher which had irises in it. I think I am around half way done with this picture. Not sure, exactly. I do know that I decided to use some light effects in both the yellow and blue flowers. I was thinking of doing the same thing for the flowers that require DMC 340 and 341, but I do not have the proper light effects color

and do not know what color to buy. I like how it has turned out so far. I think my girl friend will be happy with it.

The third thing I have been stitching is the first of three cat patterns that I am being paid for. I think I am somewhere between 45 and 50% done with this one. This one is called "Control". He is splayed out on a rug stating that he cannot be controlled.

My Thanksgiving was quiet. It was just the four of us for most of the day. Our good friends in town came over after they had eaten at his mom's house and stayed for a couple of hours, but other than that it was just us.

Christmas was quiet too. That was okay because we don't like to make a huge fuss about Christmas. We did have a nice ham for dinner, but we don't go way out on gifts and the like. Jack and I bought ourselves a television for our room with the money my parents sent us. We actually combined it with the money my SIL sent. We had to. The television took up all the money from one and so we used the money from the other to pay for the thing to put it on the wall and everything that entailed as well as the fee of the person installing it. He was reasonable, but still...I also got some pajamas, a coat, a hat and some perfume.

My birthday has been spread over several days. We had a family game night on the actual day, we had the cake and gift the next day and two days after that Sarah took me to get my nails done. I received my parents gift today in the mail (five days after the actual birthday). With the money my parents sent me for my birthday I bought myself a new swim cap and goggles for my swimming at the Y. I have been wanting/needing to do that for awhile and I just did it. I also bought some stitching supplies.

I need to sign off for now. I promise, I'll update more often now that my scanner is working.