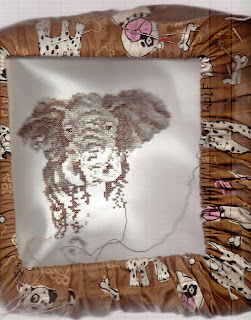 I have been doing a fair amount of stitching over the past couple of weeks. I am sorry that I haven't updated sooner, but I was debating myself on one issue in particular, related to my HAED, but I will get to that in a bit. Meanwhile, I wanted to show you I have managed to get what I'd call a good amount done on my elephant since I started restitching on him after finishing up with the cats. 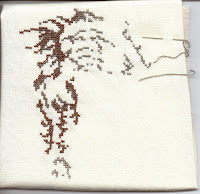 Here is the picture I took today next to the picture I took when I put the elephant down to complete the cats.I am proud of the amount of work I have done on him. The first picture of Re-Stitched Elephant was done on March 14. So, the stitching I have done on the elephant has been since I finished "Rough Day Cat" which was April 16, the day of my last blog. The biggest elephant of the picture is basically done from the bottom of his ears up. There might be 10 stitches in his right ear, but other than that completed from the ears up. There are five side views of smaller elephants and a couple of trees and some bushes on this picture. This project is long and tall (219W x 116H). With the size of the rest of  this bull elephant verses everything else in the picture, I am tempted to say once I finish the bull elephant, the project will be about 35-40% done. I do feel much better about how this project is turning out since I completely changed the material.

Now back to my HAED, "Life's Little Tangles". I had actually managed to do a fair amount on this project. I am between 300 and 400 stitches, if  I remember  right. I guess 'fair' is a relative term, but considering the size of the finished project I think it was a fair amount. remember, this was my second start on this project because I didn't like the thickness of the thread the first time around and frogged before I got too far(I was under 50 stitches at that point). This picture shows how far I am right now. I am not really liking the way it looks doing the project over 1, so I decided I will go ahead and do it over 2. I know this means that a big picture to begin with will be double the size, but I think if I feel better with the stitching of it that will be fine. Jack and I were talking about the best place in the house for it, and decided proudly on the Living Room wall. I do give away a good part of what I stitch, but this one I want to keep!! I went ahead and ordered the proper amount of material for over 2 on 25ct from Silkweavers. She is charging me one third less than another on line material store and she is cutting the piece to exactly what I want and serge the edges all the way around to prevent freying! The other store wanted to sell me a piece that I would have ended up wasting a few inches in each direction.

I did start in the upper left corner, and I will do that when I restart (for the third time). I really think it will look better over 2 instead of over 1. I know it will be much easier on my eyes!

As far as what will I do with this 25ct material that won't be used for the HAED? I have the project for my great nephew (The Noah's Ark Giraffe picture requested) as well as the roses in a bowl that I want to do (possibly for DIL) and needed material for. I was originally going to do both of those on 28ct evenweave, or 14ct adia,  but 25ct evenweave would work too. Or, I could save the 25 ct for maybe a smaller HAED. I have a freebie from them about Christmas Animals that I am not sure the size of but really want to stitch. On round three of  "Life's Little Tangles"  I ordered enough material to have 4" of material on all sides to allow for framing. That was another issue I was thinking about. On rounds one and two of doing this project I was allowing for 2" on every side. I started thinking, "is that really enough allotment for proper framing?" I wasn't sure. I really want to be able to frame this when I'm done with it and would have been beyond sad if I couldn't. I think 4" on each side will be plenty to frame it though.

Jack and I started talking about, "should I enter any of my stitching in the fair?": He said he has seen other stitching projects at the fair and he believes that mine are worthy of ribbons. The two he is talking about the most are: 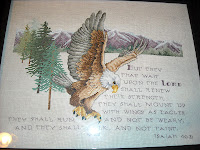 "Isaiah 40:31" (the picture on the left) and  the other one we are talking about is "Jesus in the Garden". I actually stitched the second one twice. Once for us, it is in our dining room now and once for my sister-in-law and her husband. There are other possible candidates too, but honestly, I give away a good part of what I stitch. I don't think my mom understands why I stitch just to give it away, but I get pleasure in making projects for others to enjoy as much as I enjoyed stitching them. I have spoken with a woman who told me she'd get back to me on how I'd go about possibly entering some of my stitching.

I was nominated by Lisa for a  Liebster Award. I was surprised and honored! Thank you, Lisa!


When receiving this award there are four conditions:
1 – Choose five up-and-coming blogs (with fewer than 200 followers) to pass on the award.
2 – Show thanks to the blogger who passed on the award by linking back to them.
3 – Post the award on your blog, list five bloggers you are giving the award to with their site links and leave a comment so they are aware.
4 – Share five random pieces about yourself that people do not know about you.
Now I need to honor 5 fellow stitchers with blogs who have under 200 followers. My nominees are:

The person who nominated me was Lisa. You can get to her link at: http://thesocialcrossstitcher.blogspot.com/

As far as 5 random pieces about me that people probably do not know:

1) I am told my homemade peanut butter cookies are the best
2) I am a totally left handed person.
3) I have lost a huge amount of weight since May 2009 and kept it off
4) I love the outdoors
5) I love mystery kind of shows


Now on to non-stitching news.

I told you how we were told that everyone was going to go into what the softball league termed "the draft" so that no one could have the same team, basically, this year. Rachel was a bit worried because usually if a girl goes into the draft it is by choice so she can get off of a team that she and the coaches have problems. Rachel and one coach definitely have personality conflict, as that coach downgrades his players regularly. Also, she really loved her coach the past couple of years. He made her feel good about herself. She did not get back on the team she was in the last two years (Police) which is where she really wanted to be, but, she also didn't get that horrible coach either. She is back on the team that she was on when she first started playing softball (Jorgensen Electric). He is a great coach. He listens to his players and the parents. He also works them hard and teaches them. She is getting ready to go to what I think is the third practice of the year.

I finally won the battle with my doctor over my medicine for my seizures. His office called me, I think the day after my last post, and told me they were going to allow me to go ahead and take the medicine I want , the strength I want. I must go in a couple weeks now and have a blood draw to show him the levels are right and then see him the last day of May. I want Jack to go with me to the appointment. He has no problem with that. If everything stays good, meaning seizure free, I will get my license back in mid-June. BTW, his office gal told me I basically wore him down to him finally giving in. You know what? That's okay though, because as the patient, taking this medicine before, I know it works for me! I have not had any problems since returning to this medicine.

The woman I work for every day (two hours in morning and two hours at night) should be released from the hospital any day. When she is I will get back to work :) The little bit of income I receive from her does help a great deal with the extras, like the girls softball and my car arguing with us.

Since it has been warmer, the car has not had  any problems starting, but when it is under 58 degrees, the radio will play but the crazy thing won't turn over. The thing is, as long as it is running, the shop says that can't try to fix it because there is no way to diagnose! Maybe, by the time it gets cool again, I can have enough money set aside to see about a different vehicle all together!

Jack is doing well physically. We have been doing some of the yard work together. Yesterday, while I mowed with the gas mower, he used the electric weed trimmer and took care of some of those as well as watered the plants and flowers and such. He cannot use things like gas mowers because of his pacemaker. Those little machines could screw up his pacemaker. That would be horrible!

Sarah is getting more hours at work again. She was bummed when her hours were cut, but then everyone's were, not just hers. She went and told her co-workers if they needed her to work, she'd cover their shift. She closed last night, closes tonight and will close tomorrow.

Rachel's band got low scores in the competition  last week. She was disappointed but we told her that it could be because the kids did harder songs than her school or even got more practice time in. Rachel is musically inclined. She plays the piano and euphonium. She and her sisters also have guitars, like dad, but they haven't practiced them very much. Sarah is better on her guitar than Rachel, but still, neither girl has touched their guitars for months.

Well, I should be signing off for now. I have spent all day away from stitching. Today I have paid  bills, gone to breakfast with Jack and been on my computer, mostly doing this blog during the computer time. Now I want to go stitch for awhile. I am debating on starting the Noah's Ark project for my Great-Nephew.  Haven't decided. Really want to do the elephant for my Uncle as well. I guess you could say I'm torn. I know when the material gets here for "Life's Little Tangles" I will be working on that one too. I guess my real question should be, how many projects of lage to huge, should I have going at once?