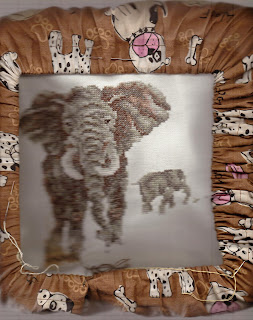 I thought it may be time to show you an update on my elephant project for my Uncle Curt. I am excited about my progress. I am completely done with the bull elephant, except for the backstitching. There are a total of five elephants, of various sizes like the side view elephant, in this project. I started working a bit on the ground beneath the bull elephant. Maybe next time I'll have quite a bit of that done as well as some of the shrubs and trees.

I called the material shop yesterday that I ordered the material for "Life's Little Tangles" from (my HAED). I had not received the order yet and I had written the check out on May 1. They did a bit of researching and called me back. The check ended up postmarked May 9. They said they would put the material in today's mail, which means I should have it by the end of the week! That means I can start the project, again! I am excited about starting it, especially this time, because I know how to do 'over two' and the piece I ordered is big enough to have four inches on every side, extra. I also requested that they serge the edges to prevent freying.  I ordered it that way so I'd have plenty of material for framing at the end. I guess my only question about the project now is, "when a project is done on 25 ct, over 2, which is what I'll be doing, do I have the thread two thick or three thick?" 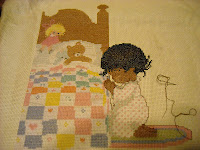 Now that I have the bull elephant done, I am seriously thinking of starting that giraffe for my Great-Nephew. He was born in January and I have been wanting to stitch him a Noah's Ark giraffe. With everything else going on though, it just hasn't happened. I want and need to do it for him though. I did the "Precious Moments Praying Girl" for his sister. Here is that one when it was very close to done. Danielle never did get the framed picture to me, so I do not have a picture of this projects completion. I need to ask her about it again. I know she is very busy right now though. She is going to school, works and is raising two children, only 13 months apart. The project for Caleb is not just a Giraffe, but Danielle requested a Noah's Ark themed picture that had a giraffe in it.  So here is what I finally decided on. It is called "Zoo Babies". It has several different animals in it, as w

ell as the alphabet. I was originally looking at a different  project in the book I have, but I have decided that the project I was originally thinking of would take quite awhile to do, it was good size (108W x 110H). "Zoo Babies" is smaller but still nice.(88W x 62H). this picture is "Zoo Babies", this picture is what the book has it on, a bag of some kind. I will just make it a project to be framed though. 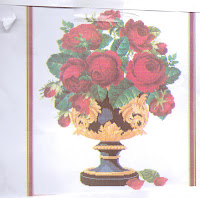 also what to start gathering the materials needed to stitch the roses in a vase or bowl.  (Pictures on the left here). I was thinking of giving that to my Daughter-in-Law. I will probably stitch it on 14 count Adia. I could also do it on the piece of 25 ct evenweave on which I was originally going to stitch "Life's Little Tangles" . The finished size of the project, if I do it on 14 ct will be right about 12.22 x 15.58. If  I go ahead and use the 25 count evenweave, the project size will be  13.58 x 17.5. Some of you may recognize this pattern. Dick, in ILCS has also done the project. The more I think about it, the more I am thinking of using the 14 ct adia. I have another HAED pattern that I uploaded for free and will probably use the 25 ct for it. It is of several animals around a Christmas Tree. I uploaded it quite awhile ago and I want to stitch it for my house.

I think between all of these projects that I want to do, both for my home and family, I should be able to stay out of trouble and stress free. What do you think?

I have great news, not related to stitching, but still...the job that I had taking care of a woman who had a stroke has started again. She was released from the nursing home yesterday afternoon and I had my first shift with her again this morning. I will be with her two hours in the morning and then two hours in the evening on the days I work. There are two of us helping her. One week one of us will work three days and the other four and the next week it will reverse. I can stitch all I want, once I have done everything she needs done.

The one bit of bad news I have this week is that my daughter's drive line on her pick-up fell off as she was going down a country road last week. We are going to be able to fix it at the beginning of next week. My parents have agreed to help with the initial cost. We are still having the attitude with our van, not wanting to start when it is under 60 degrees, but now that it has turned warmer that isn't as huge of an issue as Sarah's pick-up.

The other bit of great news I have is that Wes, the young man whom we consider like a son, will be coming home from Korea (he is in the Army and based there right now) on leave for a couple of weeks in June. His Tour of Duty will be over in Korea in October, if I remember right. We are all counting down the days. We miss and love him so much!

Well, I think that is all I have for you right now. Please take care and have a wonderful week!
Posted by Lyn at 1:20 PM