The Start of Summer

Hello, Everyone! Happy Memorial Day! Thank you for your service to those of you who have served or are serving in the military! My husband and youngest daughter and I went over to the Veterans Affairs grounds to the National Cemetery and watched a memorial service. It was very beautiful. We enjoy doing things like that.

I have managed to get quite a bit of stitching in during the past couple of weeks. I have stitched a bit on the "Elephants", "Zoo Babies" and even got started on "Life's Little Tangles". I'll post pictures of all three. 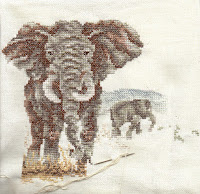 First, here is "Elephants". I worked on it some, as you can see, but, not a whole lot, I guess. My material for "Life's Little Tangles" arrived and I have been anxious to start on that. Also, I really did need a change of pace. Working with browns and greys is getting old. I am thinking about altering the pattern a bit because I started wondering if I cut the material long enough to fit the entire picture in. On the far right of the picture you can see where I have started another elephant's foot. Beyond this elephant is suppose to be some of the same kind of scenery as is behind the smaller elephant. I am honestly not sure I have enough width of material for everything.   Jack mentioned to me how he has noticed how many different issues I have had with "Elephants". He told me that I really do need to finish it out, in nothing else because of the age of my Uncle who it is going to, but I really did need a change of pace and coloring too. Uncle Curt is 80+. I will probably do some measurements and figure out what, if anything, I did wrong. What I may do is put the scenery asked for around the smaller elephant and then go to the other side of the bull elephant and put the big tree and at least one of the two elephants the pattern shows. 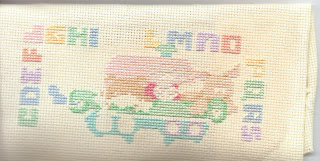 I decided, because of the needing a change of pace in coloring, that I would at least do some on "Zoo Babies". Here is "Zoo Babies" thus far. I originally had the 'J' and 'K' in as well but when I started to put in 'L' I discovered those two letters were off, so I frogged them. I figured out where I went wrong. The top row of 818 (pink) was suppose to have one more stitch than I put. There is other areas that need that color as well, so when I go to do them I will put that stitch in. The hearts at all corners (like upper left) are all pink and the wheels of the wagon(?) the animals are in are that shade. I still need to put in the giraffe. He goes under the 'H' and 'I'; the hippo (which goes under the giraffe); the rhino (which goes under the blue bird at letter 'D'); the seal (which goes under the bunny right by the 'S', finish out the wagon, put the missing alphabet letters and then of course backstitch it aIl!

I  have also stitched probably nearing 600 stitches on "Life's Little Tangles". I started in the upper left corner as was

recommended. This is the first pattern I have ever started that way. I have always started in the middle and worked my way out, but then I have never done a Heaven and Earth Design before either! The top picture on the right is my 'example' picture. What I have stitched so far is the picture below that. The top row is stitch 0 - 30. Then, going down I am also working on 0 - 30. When I have both directions 30 x 30 completely dome, I will have 900 stitches in. Page 1 is 80 stitches wide and 98 stitches tall. I'll keep you informed on my progress. When I finish this blog, I will be stitching on 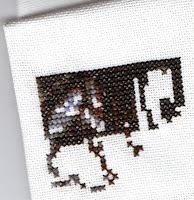 this. I think I'll end up stitching on this quite a bit this week. I feel good about my progress on "Zoo Babies", so feel like I can stitch something else. I really would like to make good progress on this pattern before my next posting. I have so many things I want to stitch! 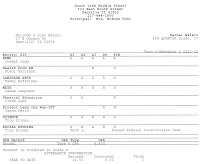 I have been making time for myself to stitch. I really do feel less stressed, though I do not normally have this many projects going at once.

School is over. Rachel brought home her report card. Scanned it so you could see. Once again, Rachel was on Honor Roll. That means her entire seventh grade year she was either on High Honor Roll or Honor Roll. That is something of which to be proud!  The high school takes their finals during the last week of school so the high school mails their report cards. We have not received Sarah's report card in the mail yet. Then again, her last day was May 24. Rachel's was May 25.

I was told this morning by the other gal who helps take care of the woman I work with that they were taking her to the hospital via ambulance because she was unresponsive. The tests they did showed that she had another minor stroke. I know she is spending at least tonight in the hospital but do not know beyond that what will happen.

I go to the doctor myself Wednesday morning. This is the doctor in charge of my seizure medicine. I had a blood test last week, to see what my levels were. If everything goes right, he should fill out the paperwork that will allow me to get my driver's license back. I am keeping my fingers crossed.

Rachel made this picture for her friend that moved to Nevada. We are considering getting her stuff to draw with...colored pencils, paper, calligraphy pens and such for her birthday in mid-June. She really enjoys drawing and we want to encourage her. This was just done with a normal pencil. She did it lighter at first and then, because it couldn't be seen real well on the scanner, she drew it darker.

Rachel's first softball game is tomorrow evening. With as much as they have practiced, I would be surprising if they didn't do well. I have not been told when Sarah's games start.

Sarah is in a horse riding competition this coming weekend. She is very excited. She has been working with and riding horses now for a couple of years and is quite good. I am not sure if she is riding just one horse or two different ones, but I do know her dad and I will go see the competition!

Sarah is also working quite a few hours at her job. She works for Subway,.

Jack is doing alright too. He and I have been doing various tasks in the yard together. We are liking how the yard is looking. I mowed part of the lawn Saturday and finished it up on Sunday evening. We have a pretty big yard and with the heat this weekend didn't want to try and do it all at once.

Well, that is about everything I can think of to tell you. Take care of yourselves.
Posted by Lyn at 3:15 PM